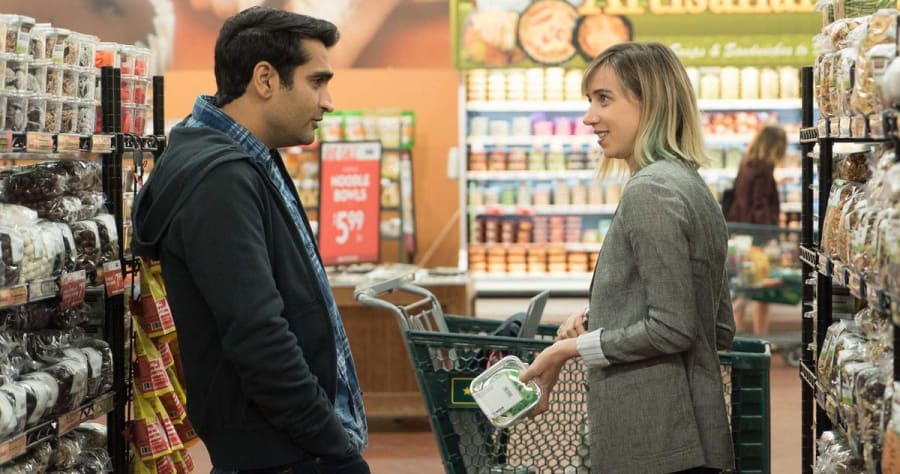 “The Big Sick”
This very acclaimed romantic comedy ended up a surprise box office winner, during an otherwise disappointing year. The buzzy crowd-pleaser is based on the real love story of star/co-writer Kamail Nanjiani (“Silicon Valley”) and his wife, co-writer Emily V. Gordon (played on screen by Zoe Kazan). Aspiring comedian Kumail meets grad student Emily after one of his stand-up sets, and the pair see their blossoming relationship challenged by the expectations of his traditional Muslim parents, and a mystery illness that strikes Emily, leaving him to try and bond with her parents. “The Big Sick” arrives on Digital HD September 5 and on Blu-ray, DVD, and On Demand September 19. Extras with the release include two behind-the-scenes featurettes on the making of the film, cast and filmmaker commentary, deleted scenes, and more.

“The Good Catholic”
Here’s another romantic comedy based on a true relationship. In this case, “The Good Catholic” was inspired by the love story of writer/director Paul Shoulberg’s parents: a small town priest who fell in love with a practicing nun. Daniel (Zachary Spicer) is a young, idealistic priest who struggles to find balance between his mentors — old school no-nonsense Father Victor (Danny Glover) and chain-smoking carb-addicted Father Ollie (John C. McGinley). Daniel’s passion for his calling never waivers, until he meets Jane (Wrenn Schmidt). The movie will be in select theaters and on VOD this Friday, Sept. 8.

Watch this exclusive clip from the movie, featuring John C. McGinley as Father Ollie, talking about compassion:“One Mississippi” Season 2 (Amazon Original)
Tig Notaro’s dark comedy returns for its second season starting September 8 on Amazon Prime. In Season 2, Tig, her stepfather Bill (John Rothman), and her brother (Noah Harpster) try to respect each other’s boundaries while living together in the family home in Mississippi. Tig resumes her radio career in Biloxi, but her point-of-view is a bit controversial for the local market. Check out a teaser here.

“Fallen”
This documentary on fallen police officers, narrated by Michael Chiklis, arrives in theaters and on VOD on September 8. “Every 53 hours in the United States, a police officer is killed in the line of duty. However these losses go mostly unnoticed, overshadowed by sensational, politically charged headlines of the day. ‘Fallen’ takes a deeply personal look at the stories behind these statistics. More than five years in the making, the film follows the stories of eight fallen officers from across the country. Told through the eyes of those closest to them, as well as the communities they served, these stories offer a sobering glimpse into a routinely overlooked and misunderstood reality.” Here’s the trailer:“The Limehouse Golem”
Bill Nighy stars in this thriller, based on the novel by Peter Ackroyd, which will be in select theaters and available on VOD and Digital HD on September 8. “The city of London is gripped with fear as a serial killer – dubbed The Limehouse Golem – is on the loose and leaving cryptic messages written in his victim’s blood. With few leads and increasing public pressure, Scotland Yard assigns the case to Inspector Kildare (Bill Nighy) – a seasoned detective with a troubled past and a sneaking suspicion he’s being set up to fail. Faced with a long list of suspects, including music hall star Dan Leno (Douglas Booth), Kildare must get help from a witness who has legal troubles of her own (Olivia Cooke), so he can stop the murders and bring the killer to justice.” 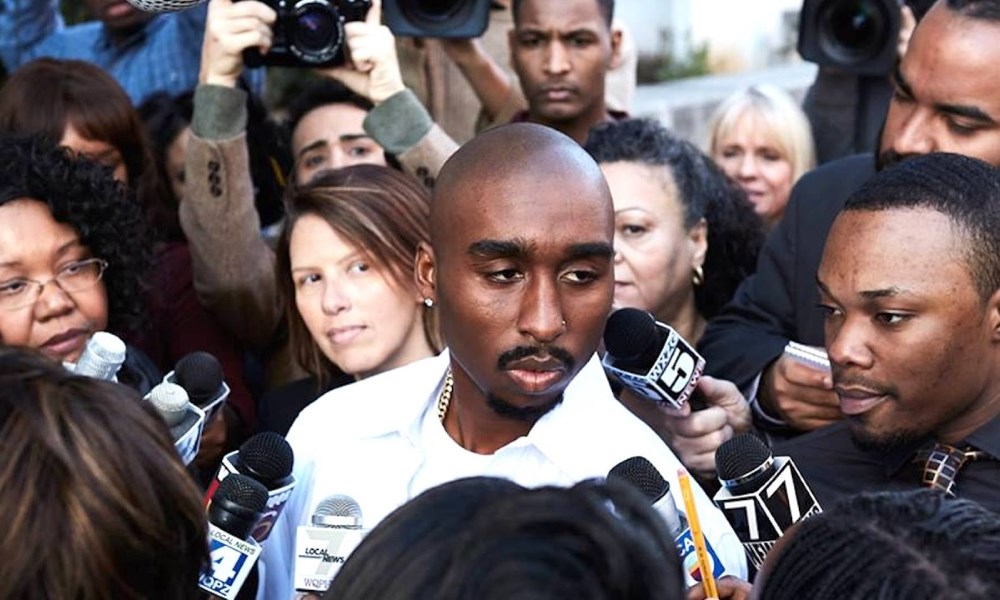 Demetrius Shipp, Jr. plays Tupac Shakur in this bio-drama on the prolific rapper, actor, poet, and activist from his early days in New York City until his untimely death at age 25. The movie co-stars Danai Gurira, Lauren Cohan, and Kat Graham, and you can check it out on Blu-ray or DVD September 5. The Blu-ray includes three behind-the-scenes featurettes, deleted scenes, and Demetrius Shipp, Jr.’s audition. The DVD has two of the featurettes, including “Becoming Tupac” and “Legends Never Die: The Making of All Eyes on Me.”

Watch this exclusive clip featuring “The Walking Dead” star Danai Gurira, showcasing her portrayal of Tupac’s mother, Afeni Shakur:“First Kill”
Hayden Christensen and Bruce Willis star in this thriller arriving on Blu-ray, DVD, and Digital September 5. A successful Wall Street broker (Christensen) attempts to reconnect with his son on a hunting trip, but things take a deadly turn when they witness an attempted murder from a bank robbery gone south. The release comes with director’s commentary, deleted scenes, extended cast/crew interviews, and the featurette “Behind the Scenes of First Kill.”

“Megan Leavey”
Kate Mara stars in this war bio-drama on the life of a young Marine Corporal whose unique discipline and bond with her military combat dog saved many lives during their deployment in Iraq. The film co-stars Common, Tom Felton, Edie Falco, and Bradley Whitford, and you can watch it on Blu-ray, DVD, and On Demand on September 5. The release comes with the bonus feature “Never Give Up: An inside look at how Megan Leavey learned to trust Rex.”

“The Wedding Plan”
This critically acclaimed romantic comedy follows an Israeli woman blindsided by her fiance’s decision to call off their wedding just a month before the nuptials; she makes the hopeful decision to continue with the wedding plans, believing that Mr. Right will just appear by the set date. Watch the poignant charmer when it arrives on DVD on September 5.

“BoJack Horseman” Season 4 (Netflix Original)
Where’s BoJack? Will he ever return to Hollywood? Find out when Season 4 of this brilliant adult comedy arrives on Netflix this Friday, Sept. 8.“The Confession Tapes” Season 1 (Netflix Original)
This true crime documentary series, available for streaming September 8, investigates cases where people convicted of murder claim their confessions were coerced, involuntary, or false.

“Spirit: Riding Free” Season 2 (Netflix Original)
It’s time for more adventures with Lucky, Spirit and the close-knit gang as Season 2 arrives on Netflix this Friday. Check out this exclusive clip from the new season, featuring Robert Knepper as the villain Grayson, as the PALS try to sign up for The Tarrell Circuit, a famous horse race coming to Miradero. But girls aren’t allowed to race? Hmmm…“The Walking Dead” Season 7
It’s possible TWD Season 7 will benefit from binge-watching, as opposed to week-to-week viewing. Find out for yourself when the 16 episodes arrive on Netflix on September 8. Season 8 will launch All Out War starting October 22 on AMC.

“Portlandia” Season 7
Fred and Carrie’s penultimate season is ready for you to put a bird on it starting September 9. After the 10 episodes of Season 7, there will only be one more eighth and final season of “Portlandia” to premiere in 2018. Prepare to binge it all “Battlestar Galactica” style this time next year.

Aye, the Droughtlander is finally over as of this Sunday. The 13 episodes of Season 3 premiere September 10, starting with “The Battle Joined.” Watch what happens as Claire (Caitriona Balfe) and Jamie (Sam Heughan) struggle on with life without each other. If you don’t have Starz (yet) but do have Xfinity, you can at least catch up on the first two seasons using Xfinity On Demand, from September 4 until September 10.

“Fear the Walking Dead” Season 3 (Sunday on AMC at 9 p.m.)
“Fear” Season 3 had its midseason finale in July, and it’s now ready to return for its second half, starting September 10 with back-to-back episodes. Here’s AMC’s synopsis for Episode 9, “Minotaur”: “In the aftermath of the Clark family’s actions, new leadership assumes control of the Ranch. Daniel assists Lola in the distribution of water.” And here’s the synopsis for “Diviner,” which will follow directly afterward: “With the Ranch dangerously low on resources, Madison and Walker leave in search of a solution. Nick and Alicia struggle to keep the peace.”

“Con Man” (Saturday on Syfy at 10 p.m.)
Alan Tudyk plays a washed-up, former sci-fi celebrity who revisits his glory days on the convention circuit in this comedy series that debuted on the web and is now premiering on Syfy. You can binge episodes back-to-back on Saturday night, starting at 10 p.m. and continuing till about 1:30 a.m.