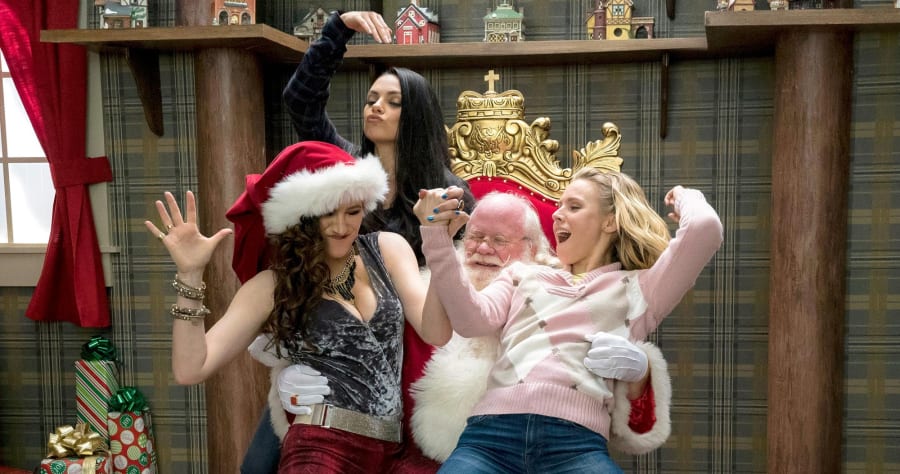 Christmastime is always one of the most stressful times of year. There are the presents, trying to wrap up work so you can actually spend some quality time with the people you love, cooking, and never feeling like anything you’re doing is actually good enough.

But there’s nobody who feels that pressure quite like a mother. They are, after all, the people who everybody turns to; they’re the ones doing most of the cooking and cleaning and shopping and prepping. They are the heroes of the holidays (and pretty much every other day too). And where better to investigate this phenomenon than in “A Bad Moms Christmas,” the sequel to last year’s surprise hit, “Bad Moms“?

What’s more, I got to travel to Atlanta to the set of “A Bad Moms Christmas.” And it was good.

If you haven’t seen the trailers for the film yet, this year’s entry in what we can all assume will be a long and profitable franchise, follows original moms Amy (Mila Kunis), Kiki (Kristen Bell), and Carla (Kathryn Hahn) as they prepare for the holidays. Adding in even more stress and befuddlement is the fact that their moms are along for the ride this time, too — Christine Baranski is Amy’s mom, Cheryl Hines is Kiki’s mom, and Susan Sarandon is Carla’s mom. If you wanted more moms in the follow-up, you will not be disappointed.

When we visited the movie’s filming location in early May, the elder moms were not present, but they were on everyone’s mind. It was a ritzy shopping center in Atlanta, Georgia, and from the looks of it, the moms had already reached their breaking point and were starting to go wild. (If you saw that shot of them in the trailer, downing trial-size shots, that’s what we were watching. It was the middle of the night and the mall was closed, which gave it an eerie, “Are You Afraid of the Dark?”-type vibe.)

At one point, we stopped and had a Skype chat with producer Suzanne Todd, who confirmed that early reports that the sequel would instead follow bad dads, was something cooked up by the studio and not part of the filmmakers’ plan.

“We wanted to give people a little bit of what they liked from the first movie, but we had a lot of conversations about comedy sequels — where they do the same thing again — and it’s, ultimately, not very satisfying,” Todd said. “So, we have a few new elements to this. There’s this idea of Christmas, and the idea of the three girls, and their relationship with their mother.”

This was something that was stressed time and time again during our set visit — that this was not some lame comedy sequel, full of recycled jokes and threadbare scenarios. Later in the night (or was it morning at this point?), co-director Jon Lucas said they were very conscious of not falling into “making the same movie again.”

One thing that Todd wanted to maintain, though, was its progressiveness. While the first movie might not seem like a grand trailblazer, it was unafraid in showing the many dimensions to motherhood, with some of them unflattering or downright ugly. It was a fully formed, deeply realized portrayal and the overwhelming response to the movie was proof that it struck a chord with audiences.

“I think that like the first movie the idea [with the sequel] is to tear down some of these personal and societal and cultural norms of both torturing ourselves about not being good enough,” Todd explained.

And what of the new moms on the scene?

“We talked a lot with the actresses who they thought their mom would be,” Todd said. “Amy’s mom is very overbearing and Kiki’s mom has no boundaries; Carla’s mom is the explanation for why Carla is the way she is. The nice thing for us is that we had so many great actresses who wanted to be involved in the project. It was actually really, really fun. They’re also slightly different ages — Cheryl is closer to Kristen Bell’s age and the other are a slightly different spread. They were grandmas from a different decade.”

During a break in filming the original moms — Kunis, Bell, and Hahn — took a few minutes to talk to us about their experience on the movie. They were in a small, disused storefront, which was packed with lighting equipment and make-up and camera stuff. It was surreal that a space that could have been a Spencer’s Gifts was now a critical junction for a major motion picture production.

Echoing Todd’s statements, Kunis said that the sequel is taking the complexity of the characters into consideration: “I think that embracing that characters are flawed and allowing the women to not be the perfect, stay-at-home mom character is important.” She then added, “I think it’s important to show real life.”

Bell said: “There’s nothing funny about perfection,” and then hastily added that while that phrase is really good she didn’t come up with it.”

The addition of their mothers has added even more to their characters, according to the actresses. “I think it’s made my character more dimensional. You saw the journey we went on the first one where we were taking charge of our lives and we weren’t going to be pegged down,” Bell said. With the addition of the mothers, she said, “You see these characters very much out of their element.” Hahn remarked that, “There’s only one woman who would make Carla feel small and that’s her mother.”

Other differences for the sequel: Bell’s character wears “a little bit more eye make-up in this movie” and the fact that Kunis’ character doesn’t “get action,” if ya know what she means.

When the topic of avoiding comedy sequel fatigue was brought up, Bell was quick to say that the additional mothers sets it apart from the original pretty spectacularly.

“It creates an entirely different layer for each of our characters, with our relationships with each other and the dynamic with each other,” Bell said. Then Kunis added: “The thing that people would have assumed with the sequel is, ‘And then the mothers go to Hawaii,’ or, ‘And then the mothers go to Vegas.’ And it’s not that. I think what makes this one different is that it stays true to the story. It’s not like a shtick, where they go on a different adventure.”

With that the bad moms were pulled out of the former Brookstone or Sees Candies and went back into the mall, to fight and yell and drink heavily. Hey, Christmas will do that to you, even if you’re in Atlanta in the middle of summer.