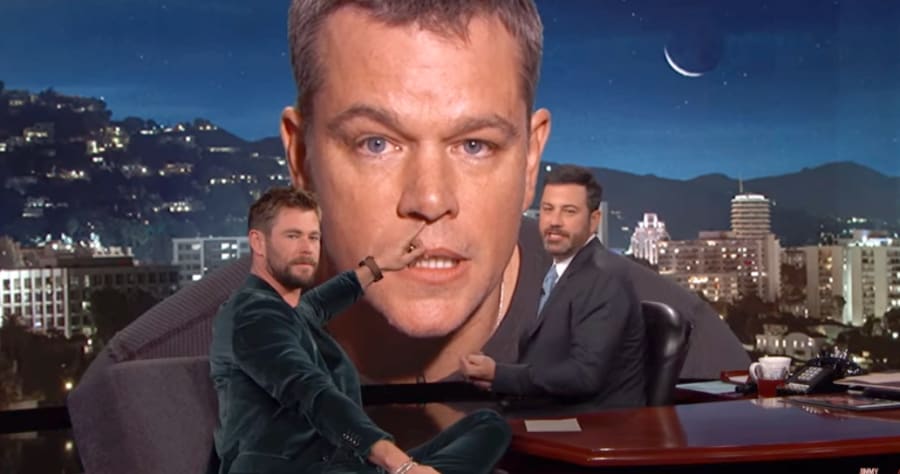 Even if you’re tired of the Matt Damon/Jimmy Kimmel fake feud, watch this video for Chris Hemsworth‘s take.

“Thor: Ragnarok” just premiered across the street from the “Jimmy Kimmel Live” set, so Hemsworth (Thor), Mark Ruffalo (The Hulk), and director Taika Waititi went on JKL to talk up the movie. While Hemsworth sat on stage with Kimmel, Ruffalo and Waititi were backstage in the green room. You know who else was there? The same guy who has been waiting backstage for years for his chance to get on the show. So when the cameras went backstage to talk to Ruffalo, Damon tried to sneak his way into the frame, enraging Kimmel. “It’s the mighty Thor not the mighty bore,” Kimmel snapped.

Cutting away from the backstage cameras, Hemsworth told Kimmel he is friends with Damon out of pity:

“I didn’t invite him. I mean I’m friends with him, but more out of — I feel sorry for him. He has nothing, he has nothing. I saw a friend in need so I decided to extend a handshake.” Hemsworth said he has gone on vacations with Damon, but only because Damon has turned up to his house in Australia, uninvited.

Damon returned for more on-screen shenanigans after that, so watch it all:The whole thing is funnier than it has any right to be, especially after this bit has been done so many times.

Apart from this, it’s a bit of an awkward time for Damon, since he got himself dragged into the Harvey Weinstein drama, and has been trying to drag himself out.

“Thor: Ragnarok” has been getting good reviews so far, and it opens November 3.