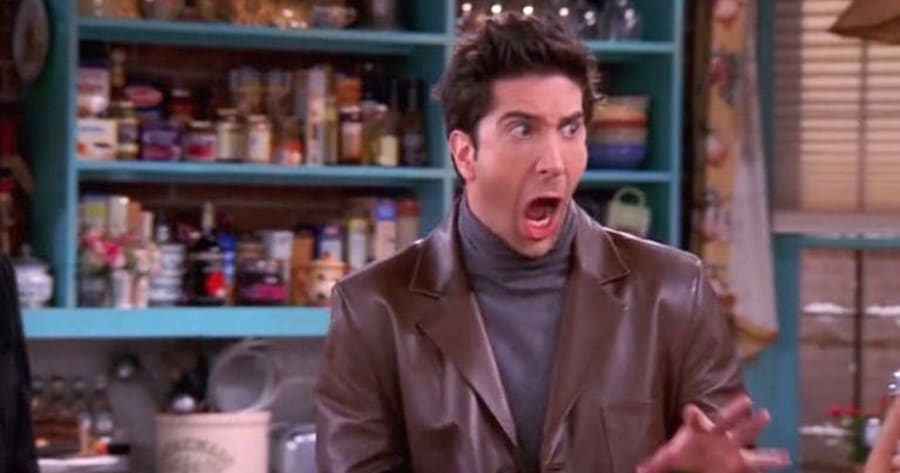 Could this BE more mind-blowing?

“Friends” ended its run in 2004, 12 years before “Black Mirror” Season 3 would create the amazing episode called “San Junipero,” which just earned multiple 2017 Emmys for Netflix. But Netflix itself recently dug up some “Friends” footage that suggests Ross (David Schwimmer) predicted or even invented the storyline of the episode.

Warning: Part of the “San Junipero” plot will be spoiled for you, by Ross, if you haven’t seen it.

Check out this casual exchange between Ross and Chandler (Matthew Perry), which played out as the “Friends” credits rolled:

“By the year 2030, there will be computers that can carry out the same amount of functions as an actual human brain. So, theoretically, you can download your thoughts and memories into this computer and live forever as a machine.”

The live audience laughed at the idea, as Chandler gave it some deep thought. Then the Netflix video cut to a brief shot of Gugu Mbatha-Raw and Mackenzie Davis dancing in the 2016 “Black Mirror” episode “San Junipero,” which basically played out the scenario Ross predicted.

Netflix every-so-wittily titled their video “The One Where Ross Invents San Junipero”:
To Netflix, this is all just a cute way to promote both “Black Mirror” and “Friends,” which are now streaming. But from here, it’s still another sign that “Friends” is the key to EVERYTHING.

You should watch all of “Black Mirror” before Season 4. The episodes are standalones, so you don’t have to catch up on a continuing storyline, but each episode is a diamond worth treasuring. Season 4 will premiere sometime in 2017, which means in the next two months, on Netflix.