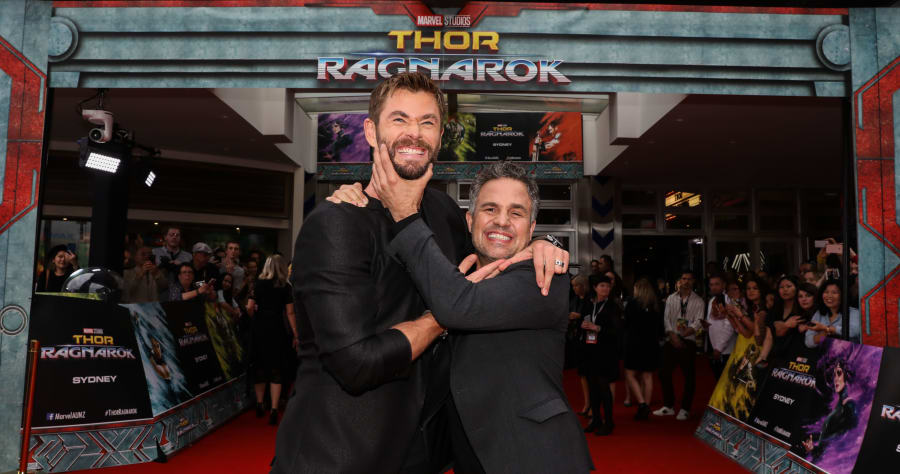 Oops… An Australian TV host revealed a pretty major “Thor: Ragnarok” spoiler during a talk show interview with stars Chris Hemsworth and Mark Ruffalo, repeating the spoiler twice before the actors cut him off.

The spoiler comes around the 6:20 minute mark of the video below, from the TV show “The Project.”

Spoilers ahead!As the video shows, the group was talking about Hemsworth and fellow Australian Cate Blanchett, who co-stars in “Thor: Ragnarok” as Hela, the Goddess of Death. That’s all fans knew about her … until one of the TV hosts casually revealed this:

TV host: “Obviously, it’s a star-studded cast. Our very own, the gorgeous Cate Blanchett plays your sister, Chris, and for a lot of this movie, your sister, she’s trying to kill you, your brother’s…”

Hemsworth jumped in: “You can’t say sister. You can’t give that away.”

Ruffalo added: “Ixnay on the ister-say.”

Hemsworth: “This is not live, is it? We can rewind.”

Ruffalo: “Is that a spoiler?”

The TV host said he should probably remove everything else after that question. The audience just laughed. In the Marvel comics, Hela is related to Thor as Loki’s daughter, but apparently this sister bit is one of the movie’s twist.

In related spoiler news, Ruffalo accidentally live-streamed the start of “Thor: Ragnarok” during the premiere, giving fans 10-15 minutes of audio. Ruffalo later explained to Australia’s Studio 10 that he thought he shut it off, but he had never done Instagram Live before and didn’t press the required two buttons to stop it. So a random woman he didn’t know came up behind him during the premiere, poked him on the shoulder, and said to turn his phone off ’cause he was broadcasting the whole movie.

Watch him explain that oops:By the time they’re done, there will be no more “Thor: Ragnarok” surprises left before the Friday, November 3 opening. But at least they’re having a good time on the spoiler promotion tour!