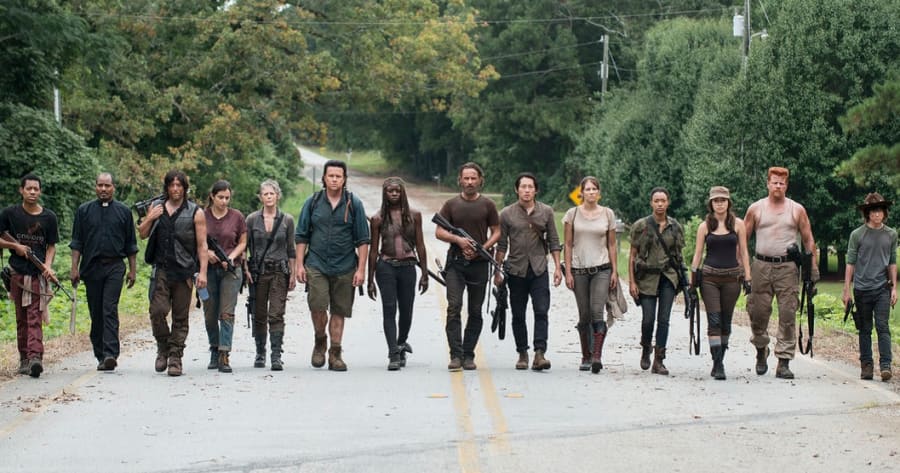 Is this good news, “The Walking Dead” fans?

When “Fear the Walking Dead” was first revealed as a “companion series” to “The Walking Dead,” there were no plans to ever do a crossover. The two shows are set in the same zombie/walker apocalypse, but the timelines are different and the locations are on opposite U.S. coasts. But never mind, ’cause a crossover is happening anyway “in the next year.” That’s the fresh news out of NYCC, with AMC even sharing a special poster to promote it.

Fans were mixed on this huge event, but most seem cautiously optimistic:

Yaaaasss!!!! Been hoping for this! 🙌🙌🙌 #TWD #FearTWD #Crossover pic.twitter.com/pR8CAd1keT

I thought they said the two shows would never cross over? I’m fine with alicia going to TWD and leaving everyone else behind.

When you find out a #TWD & #FearTWD #crossover is OFFICIALLY HAPPENING! 💀🎉 #NYCC pic.twitter.com/4XxgZzUF9p

Am I dreaming or is this dynamic duo finally going to team up? #TWD #FearTWD crossover pic.twitter.com/TbMADCyJlV

Maybe I just have my tin foil hat on, but this cryptic tweet from Cudlitz has me wondering if Abe may be the #TWD/#FearTWD crossover. pic.twitter.com/79ZBSDucym

By this point, no one cares.

So happy!!! AMC Just let out that there will be a crossover between Fear TWD and TWD !! ‘WORLDS WILL COLLIDE’ 😄😄 #TheWalkingDead

A crossover would be the death of #TheWalkingDead Don’t #jumptheshark

“Fear the Walking Dead” viewers seem a bit more into the idea of a crossover than fans who just watch the mothership show.

Who will be crossing over? That’s the question. “Fear” is the show that really needs a ratings boost, so it might be someone from TWD that shows up on that show, to add viewers. But that would mean a flashback for a TWD character, like — for example — Morales, who left Rick Grimes and company in Atlanta in TWD Season 1 to go to Birmingham, Alabama. Maybe they kept heading west? Or maybe there’s something to Michael Cudlitz’s post, and Abraham does cross over. His mission started in Texas, but it’s possible “Fear” could connect with him in an early days scenario.

We’ll have to wait and see how they do, with more intel coming out in the next couple of months.

“The Walking Dead” Season 8 premieres Sunday, Oct. 22 at 9 p.m. on AMC. It will continue into 2018, with the second half of the 16-episode season most likely airing February to April. Meanwhile, “Fear” Season 3 started in June and is ending its 16-episode run on Oct. 15.