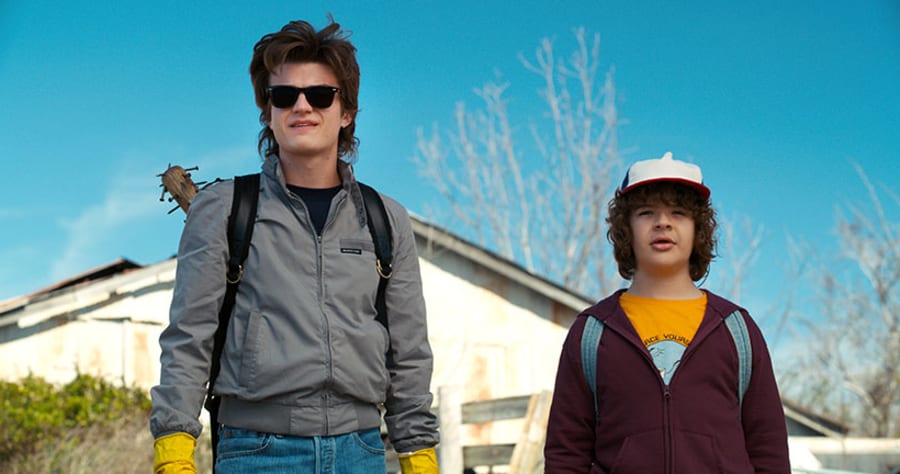 “Stranger Things” Season 2 just debuted last weekend, and fans have thoughts about everyone and everything. But one thing pretty much everyone can agree on is that Season 1’s two-dimensional cool kid stereotype Steve Harrington (Joe Keery) found himself a warm, welcome, wonderful third-dimension this year.

SPOILERS AHEAD ON SEASON 2

Steve basically got dumped by drunk Nancy (Natalia Dyer) as she realized she wanted to be with Jonathan Byers (Charlie Heaton). Steve did not go emo (that wasn’t even a thing in the ’80s) or try to get revenge. Instead, he showed how much he still cares about Nancy, and is still just a good guy in general, by helping her little brother Mike and his friends.

get you a man who will look at you the way steve harrington looked at nancy pic.twitter.com/8U2BJS12gD

Steve became the new babysitter, like Mr. Mom with a Negan-and-Lucille spiked bat. He especially bonded with Dustin (Gaten Matarazzo) giving him tips on girls and hairs, as they both grieved for lost love.

The producers told The Hollywood Reporter they knew they loved Joe Keery and wanted to bring him back in a big way but weren’t sure how to utilize him once Nancy moved on.

As Shawn Levy put it:

“The storyline of Steve Harrington in the second half of Season 2 was completely unanticipated in the outlines for this season. That was the Duffer Brothers reacting to what they were seeing in the first couple of episodes, and having the audacity to say, ‘You know what? We have a better idea. We’re going to completely change the game plan for episodes five through nine.’ […]

It came from a place of not wanting Joe Keery to play the sad sack beat for nine episodes. What’s the scenario we can put Steve in to once again surprise us and once again step up in a way that a stereotypical character wouldn’t? That led to the Steve and Dustin alliance, which led to such incredible character work and moments for the second half of the season.”

“We were in the middle of writing the season when we realized Dustin was also all alone. He was also about to suffer from this heartbreak [in the love triangle with Sadie Sink’s Max and Caleb McLaughlin’s Lucas]. We realized Steve was also suffering from heartbreak. It was very much in the middle of the season — we’re talking about months into the writing — that we decided to put these two characters together. The second we started writing it, we got really excited about the possibilities. What Joe and Gaten did exceeded our expectations. Their bromance, for us, is one of the highlights this season.”

Gaten Matarazzo told THR he basically feels the same way about Joe as Dustin does about Steve:

“I love Joe so much. For me to get to work with him so much this season? It was amazing. He’s such a great guy, and he really is a great actor. He’s very passionate about what he does. I look up to him in a way like that. He’s kind of like a big brother to me.”

Fans love him, too:

Steve Harrington: from popular jock to doting mom with a dish towel on his shoulder, hands on his hips, telling kids to stay out of trouble pic.twitter.com/EYq7msxQkt

we all can agree that mom steve harrington was one of the highlights of season 2 pic.twitter.com/lbMuPo0QIp

I only have love and respect for my mom, Steve Harrington pic.twitter.com/P0FTkE8wuc

steve harrington acting like a proud parent to dustin rt if u agree #StrangerThings pic.twitter.com/nqenERQD1H

if steve harrington, single mom, were to hear about the way THOSE girls treated dustin at the dance,,,, pic.twitter.com/XGMikm2gGV

rt if steve harrington is a better babysitter than the wheelers as parents.

Steve Harrington being a dad is the best thing ever pic.twitter.com/gK5an6D8Pm

Mom of the year goes to Steve Harrington pic.twitter.com/vot9IUfRe1

in this house, we love and cherish dad steve harrington and all his children. pic.twitter.com/iGXgFnwmwK

“Stranger Things” Seasons 1 and 2 are now streaming on Netflix. Season 3 will presumably arrive next year.