Stars Mourn Comedian Ralphie May, Dead at Age 45: ‘This Hurts Too Much’ 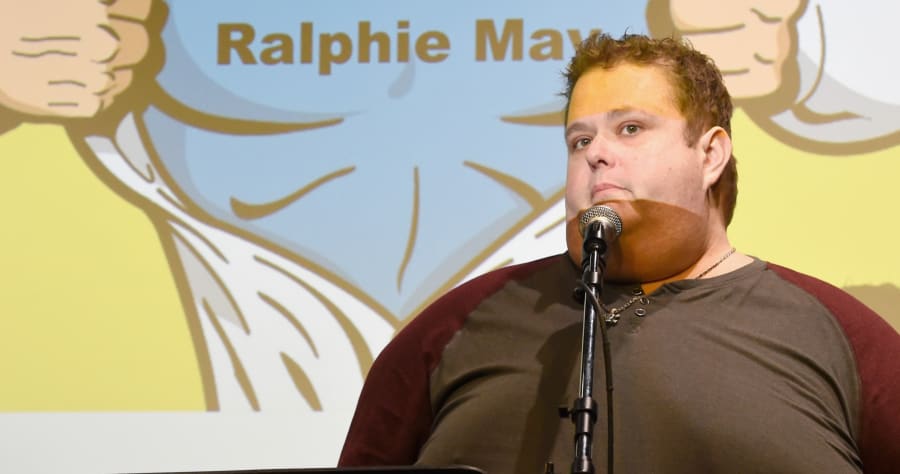 Stand-up comic Ralphie May was found dead Friday morning, after performing the previous night in Las Vegas. The “Last Comic Standing” runner-up, also known from his Netflix specials, was 45-years-old.

May’s manager, Judie Marmel, confirmed the comedian’s death to The Hollywood Reporter, saying he died of cardiac arrest after battling pneumonia. His body was found at a private residence in Las Vegas. May was in the middle of a nationwide tour. He had canceled some gigs in the past month due to his pneumonia, but TMZ said he still kept performing some shows, including one Thursday night at Harrah’s.

May’s career flourished after he appeared on “Last Comic Standing” in 2003 and finished second, after Dat Phan. He went on to appear on “The Tonight Show,” had a couple of stand-up specials on Neflix — “Ralphie May: Unruly” and “Ralphie May: Imperfectly Yours” — voiced a character on “Squidbillies,” and was in an episode of “Inside Amy Schumer.”

Stars have been reacting on social media to May’s death:

Wow….I was just told that Ralphie May passed. I’m truly saddened by this. He was a good dude. Heaven just got another funny angel RIP man

.@Ralphie_May helped get me in @TheLaughFactory. He didn’t know me at all and after he saw my set he told Jamie Masada to have me onboard.

.@Ralphie_May was genuinely the nicest most encouraging person you could meet. Always unconditional love from him.

.@Ralphie_May introduced me to @jaymohr37 and I was their opening act at @TheIrvineImprov, still my favorite week of standup of my career.

RIP to the great Ralphie May. Thank you for the laughs, the specials, and always being so kind to everyone here. We love you. #paidregular pic.twitter.com/gttbLa2gfj

NO! #RalphieMay was such a nice guy! Last time we talked backstage at @zaniesnashville I promised to put him in the Jay/Bob movie. Dammit… https://t.co/zrljotClGr

It was a fun summer with you n biscuit. Safe next gig. Miss the shit out of you already. Xoxo n #RIP @Ralphie_May pic.twitter.com/MMmvlQjnA9

Ralphie May. Dammit. You were a funny and sweet mofo man. Rest In Peace.

I love you RALPHIE MAY

Oh man fellow comedian and friend Ralphie May just died. So crazy. RIP Ralphie. You my friend were one of the nicest and kindest out there.

I once watched Ralphie May order 400 shots for the entire bar. #RIPRalphieMay

Man…we lost one of the greatest today. I proud to have called this man one of my best friends & mentors. May you Rest In Peace Ralphie May

Pic is pretty damn sad. This is when we were in Vegas before our first Virus show. RIP Ralphie May, Otto and George and Patrice O’Neal. pic.twitter.com/LJMDn3HBsf

According to THR, he’s survived by his wife, Lahna Turner, and children April June May and August James May.