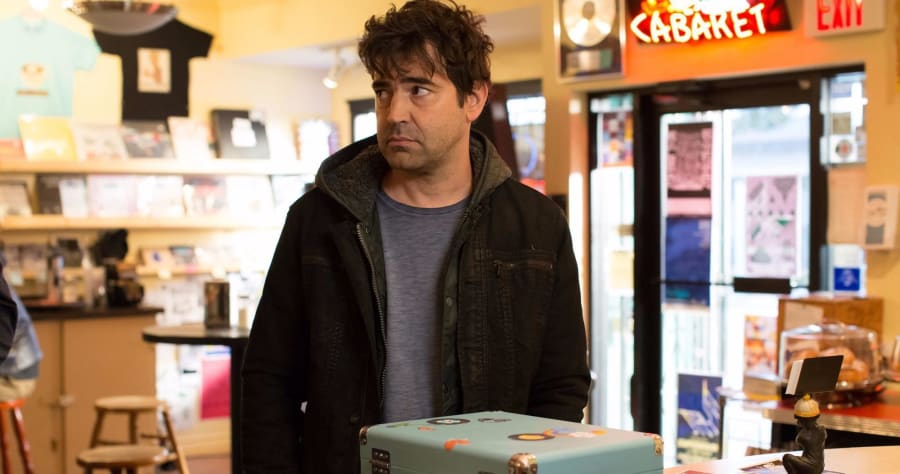 After his 25-year-career in Hollywood, you’ve probably seen Ron Livingston in a lot of things. But his new TV series “Loudermilk” offers a Ron Livingston you’ve never seen before.

As Dave Loudermilk (referred to by last name only), a former music critic, current recovering alcoholic and AA counselor whose people skills leave much to be desired. Even as he’s doing his best to rebuild his life and reconnect with society, his unfiltered and outspoken nature still manages to constantly rub people the wrong way. Thankfully, Livingston brings a freshly rumpled and amusingly abrasive quality to his repertoire.

The Audience Network series created by Peter Farrelly (“Dumb and Dumber“) and Bobby Mort (“The Colbert Report“) is constantly amusing even as it never shies away from the darker potential of the addiction struggle. Livingston infuses the oft-cynical lead role with a deftly light touch that makes him compellingly relatable, even in his more misanthropic moments. Livingston joined Moviefone for a look at the role he’s loving playing, as well as an overview of his quarter-century in the spotlight.

Moviefone: Tell me about the entry point. What did you first find fascinating and understandable about him?

So I like the idea and I thought it was funny! I was drawn to the idea of getting to play an unfiltered guy on a show that doesn’t have to adhere to the standards and practices. And doing it in a world of comedy.

And then there’s the element of Peter Farrelly, who has such a unique and fantastic like track record. You see where all through his career he’s been willing to sort of cross the line and explore exactly where that line is. But everyone I’ve ever talked to, when I said that I was in the mix for this thing were like, “Ah, you’re gonna love Pete! He’s a great guy!” So that was something that was a big part of it, too.

This show really straddles the dark and the light, and that tone is always a tricky thing to land on. What has that been like for you to keep him dark enough that you can see why people hate him and light enough where people are still rooting for him?

Well, I’m a firm believer that there’s a whole cult of a character’s likeability, and a lot of the characters you know –- Dudley Do-Right, Prince Valiant -– they’re not very likable. Like they have all these wonderful qualities, but there’s something that’s missing from them.

There’s something about scoundrels, you know? There’s something about Han Solo and that I think we’re drawn to because we wish that we could say that, or we wish that we could do that. I also think that audiences give you the credit if they see a character struggling, trying to do the best he can. He doesn’t have to actually succeed at doing anything of positive value. You just see that he’s trying to live his life according to whatever principles he’s found for himself. And I think they relate to that, because I think everybody struggles with that some form or another.

Do you feel optimistic for him? On one hand it looks like maybe his best days are so far sort of behind him, but so are his worst days.

I think he’s been given a rebirth, as far as in the sobriety has really allowed him to plug back into his life again. And it’s something in a half hour comedy, too. There’s always this idea where some crazy sh*t would happen but by the end of the episode we’re right back where we were because it’s gonna match up, it’s gonna dovetail, you know? So you’ll go on a loop but people don’t really change. They end up exactly where they are.

We don’t do that. It’s very much a serial show, although Pete tries to build it so that you could watch one episode out of context and really enjoy it and not necessarily have to know what the big stories doing. But there’s something about addicts and alcoholics, that they’re in a dramatic sense fighting against that circle of constantly returning back to square one.

And there’s the idea that recovery is this ongoing thing that never actually ends. You’re always fighting the same demon. It’s not even a new demon with a new face, it’s the same thing. And you get a whole bunch of people who are doing that and they can’t manage to take care of themselves, but somehow they find a way to take care of each other. To me there’s something that’s both really funny about that but also really human.

Did you check out any AA meetings, to get a sense of that community?

I did. Yeah, I had been to some Al Anon stuff in the past, and I went to a couple of AA meetings to sort of get a taste of it. Something I really quickly realized is that, “Oh, we’re not doing AA on our show. This is…We are doing AA’s dysfunctional cousin.” Like, it’s the little-messed-up version.

The main difference is, in AA they don’t have designated counselors. Everybody’s equal who walks in, someone will raise their hand to chair the meeting, but there’s no teacher in the room. In our show, Sam is the guy that’s there to shepherd the whole thing along. So it’s 12-Step, but we’re not really able to adhere to all of the AA stuff.

So I did go. I found it actually a lot more stressful. The first meeting I went to was really intense, because I expected it to be an auditorium with like 100 people and coffee in the back, and it was a table with six people, so it became very clear that I was going to have to talk. You go from there.

Did you find that there was a humor in there too?

Oh yeah. I’d known that already, because if you work in showbiz enough you meet plenty of people in recovery, and people who aren’t in recovery. There’s a gallows humor to it, there’s a cavalier attitude. I think because what it is, is you’re so vulnerable. It’s very sobering to realize that, and I think you almost have to counteract that with some sort of humor to make you feel like you have some kind of control over it, and to get through it.

You’ve had such an interesting and diverse career. You’ve had things that have had a huge pop spotlight like “Sex and the City,” and you had something that’s had a cult endurance like “Office Space,” and something that shows your dramatic range like “Band of Brothers.” Are you happy with the map that you have now as a career?

I love it. I love it. I was always kind of driven by the idea that I was always scared of getting stuck in something. I didn’t want to do the same thing over and over again. I didn’t want to get put in one box, so I was always looking to do something that I’d never done before. Or something, like “I haven’t done one of these –- let’s do a horror movie!” “Well, I want to play an astronaut, let’s go do that!” “Let’s do an improv movie where we make up all the lines.”

Now, at this point in my career, where, I’m not really afraid of going down in flames in the way that I was, because it’s like, “Eh, flames.” If you get shot, you get back up again.

You could have said “I’m a movie star, I’m only going to work in movies, but with “Sex in the City,” “Band of Brothers,” you’ve been part of the vanguard that led the change to what TV is today. So was it easy to say yes to a TV show now?

Oh definitely. I think if anything, I remember back in the days when I would be meeting with TV executives, trying to look for a fit on a show, and they would go, ‘Well, what kind of thing do you want to do?” I would pitch this sort of crazy idea about this and that, and they would look at me like I was from Mars. Like, “Have you never seen an hour of television?” Whereas now, that’s the kind of stuff that everybody’s doing.

Everybody’s trying to find something that’s strikingly unique, because everyone’s trying to carve out a unique niche for themselves to stand away from everything else. So I think it’s kind of a golden age for the medium. The technology too, we’re not chained to, you have to clear your schedule every Tuesday at 7:30. That really kept us from being able to do really long form, great serial stuff on television, because there was only so many shows that people could make that kind of commitment to.

And, nowadays, I feel like with the DVR thing and the streaming thing, you can tell a 10-hour story, and people might even actually sit through it and watch it back-to-back for 10 hours. You never know. But, yeah I think you can get a lot deeper in stuff nowadays.