‘Riverdale’ Star Lili Reinhart: Next Week Is ‘Betty’s Most Intense Episode EVER’ 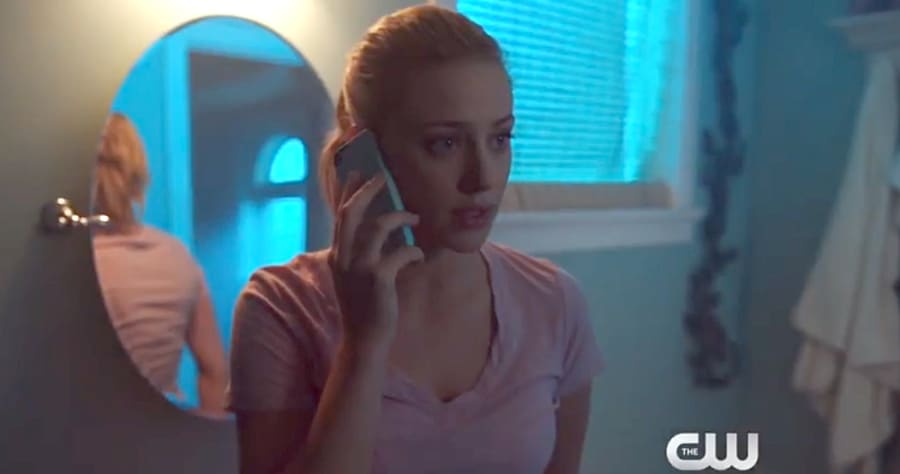 Betty Cooper and her iconic, beyond reproach ponytail are in deep with the Black Hood.

“Riverdale” Season 2, Episode 4 connected Betty to the Black Hood, who is basically stalking her now. He said he was inspired by Betty’s speech. He shared a code only she could solve. And the episode ended with him calling her. A promposal has to be next.

GRAHAM PHILLIPS (“The Good Wife”) GUEST STARS AS VERONICA’S OLD FRIEND NICK ST. CLAIR – When Alice (Madchen Amick) publishes a fiery piece in the Riverdale Register blasting the Southside, Jughead (Cole Sprouse) is forced to take matters into his own hands to try and keep the peace.

Betty (Lili Reinhart) turns to Archie (KJ Apa) for help after receiving an ultimatum that could potentially destroy some of her closest relationships.

With their SoDale open house fast approaching, Hiram (Mark Consuelos) and Hermoine (Marisol Nichols) enlist the help of an unlikely ally to get some potential investors on board.

Here’s the promo:We may have to adjust our theories on the Black Hood, or agree that it’s someone in Betty’s family. But is her dad TOO obvious a suspect now?

Anyway, actress Lili Reinhart teased that “When a Stranger Calls” is a big hour for Betty:

😱 just wait until next week. Betty’s most intense episode EVER. #riverdale

Don’t forget that Betty’s sister just booked a new role on “Once Upon a Time,” which may or may not have anything to do with the Black Hood plot.