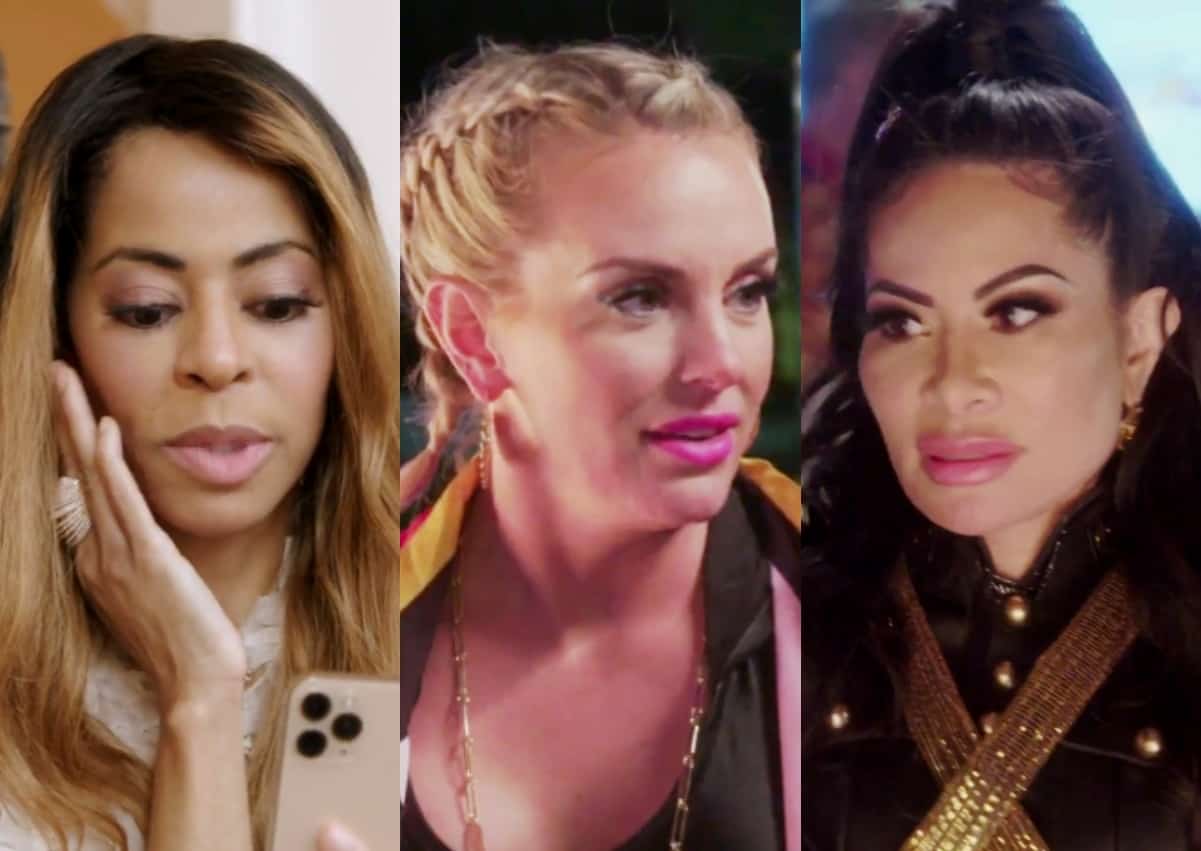 Hello! And welcome back to Real Housewives of Salt Lake City, the little show that’s hanging on by a thread! It’s quite possible RHOSLC won’t be renewed for season two, which is a shame because — and this may be local recapper bias on display — I’ve really enjoyed season one so far! Maybe it’s the horrible time slot, or maybe viewers just aren’t into the mountain folk… je ne sais pas. All I know is that I’m along for the ride until the bitter end, ya dig? Now let’s get to last night’s episode.

We start off with Jen Shah making notes for Sharrieff’s upcoming birthday party. She tells assistant #302, “I want it to be Shah-mazing, Shah-bulous, Shah shah SHAH shah Shah. Shah!” Jen then FaceTimes Whitney Rose and tells her Sharrieff’s party is going to be hip hop and… golf-themed? WEIRD. The subject of Mary Cosby comes up, and Jen explains to Whitney that inviting Mary would feel fake, so she’s not inviting her.

Over at Mary’s house, she FaceTimes with grandpappy, and she informs us that after her grandmother died, Mary was left with churches, restaurants, and houses galore, and oh… also her own husband. Alrighty, I take back what I said about Jen’s weird party theme because it doesn’t hold a candle to Mary’s general batshittery.

When asked how many homes Mary owns, she doesn’t even know, but she makes it a point to tell us that when they’re not in said homes, they remain empty… because the Cosbys don’t share. How Christian of her. Mary tearfully tells Robert that she wasn’t invited to Jen’s hip hop party, and she thinks the other women took Jen’s side at the Met Gala luncheon. She feels iced out from the group, and I would normally feel bad for someone in this situation, but Mary’s kind of awful, so…

Moving on, Heather Gay is having a Valentine’s Day get together with her girls at their house, and there is pink EVERYWHERE. We meet her ex-husband Billy for the first time, and huh. He looks… like… a polygamist. Kidding! (No, seriously.) I dunno, he’s got that Warren Jeffs lurpy vibe going on, and he IS supposedly Mormon royalty, so I’ll just leave it at that. Anyway, Billy wolfs down a cupcake and blames it on the cat. (Dude just made a sworn feline enemy for life.) Everyone gathers in the living room, and Heather gives the girls diamond stud earrings. Aww.

Next, Whitney walks up to Mary’s enormous front door (in heels… on ice), and Mary greets her in pink boots the size of my car. Even though Mary was tromping around in those things all over the house just a few seconds ago, she makes Whitney wear booties over her heels because of course. Mary then shows off her bedroom/closet, and Whitney tells us exactly what we’re thinking: “If your clothes are taking over your 20,000 square foot house, you might be a high-end hoarder.”

The ladies have a heart-to-heart about Mary feeling left out in the cold. She chokes up as she laments that no one has had her back since the luncheon, and she feels she’s being mistreated because everyone is afraid to say something. Whitney asks Mary if she heard anything from the other women, and Mary confides that Lisa and Meredith both told her they’re scared of Jen. Whitney is stuck in the middle of Mary and Jen’s issues, and she feels bad for not being supportive enough of Mary.

Up in Park City, Meredith, Brooks, and Seth are trying to figure out dinner. Frou frou Meredith wants sushi, and ol’ sloppy Seth wants Chef Boyardee ravioli. Brooks gets on the horn to order food, and Seth slobbers all over Meredith. It’s cute to see them flirt, especially after what an emotional season they’ve had, but Brooks is roiled by the sexual tension in the room. (Side note: Mmm, that sushi looks good.) At the dinner table, Brooks tells Meredith and Seth, “Ummm, I’m in the bedroom below you, so if you’re going to have sex, pick another room.” How about ya rent your own place so you can have your own rules, Brooksy boy?

Whitney visits her ditsy friend Sarah (from episode one!) in a Canadian tuxedo and immediately punctures a hole in Sarah’s kitchen mat with her stiletto. We learn that Justin’s parents still have his wedding photo with his EX-WIFE up on their wall. Awkward! Whitney tells Sarah about Jen’s beef with Mary, and she is scared Jen is going to have a big reaction if anyone brings it up. DUH, Whitney. It seems like she has officially entered the ‘sh*t-stirrer’ phase of Housewivesery (a very technical television term) because last episode, she was gossiping about Meredith’s marriage, and now she’s moved onto the Jen/Mary drama.

Lisa Barlow takes her family to the Living Planet Aquarium out in Draper. The youngest son has a wild imagination and thinks that glofish are made out of alien blood from Area 51. It’s so hard to keep up with Lisa’s talking head because of her rapid-fire Diet Coke speak, but I think she said that she and John are working on spending more time with the family, so that’s good! They feed adorable penguins, and Lisa mentions her husband’s latest business venture, Fresh Wolf, a men’s grooming products line. She rambles, “We go hard, bessy, bessy, bessy, Fresh Wolf, so we can spand time with the family.” Or something like that.

Over at the Shah Chalet, Jen is prepping for Sharrieff’s party, and she tells her assistants that he thinks they’re just going out on a date. She FaceTimes with Sharrieff, and when he asks where they’re going, she says it’s a surprise. “I don’t like surprises.” What could possibly go wrong? We get a montage of the women picking out their “hip hop” outfits, and hoo boy, I’m kind of nervous to see the end results.

Jen and Sharrieff head out for their date, and Jen tells him they’re going to Popeye’s for dinner. Sharrieff looks like a kid in a candy store and is all, “Mmmm, I’m having a shrimp po’boy tonight!” Too bad Jen is lying because they’re actually going to Top Golf… in Midvale. Once Sharrieff realizes he’s not getting a po’boy, I can see his heart sink a little, which I totally understand. You can’t just wave Popeye’s in someone’s face and cruelly take it away at the last second. Whenever the hubs mentions Popeye’s to me, I’m like, “OOOH YEAH, BISCUITS,” and I’d be furious if he tricked me like that!

Ahem, sorry. I’ve made it abundantly clear how I feel about sushi and Popeye’s in this post, so we can move on now. Jen and Sharrieff pull into the Top Golf parking lot, and Jen coyly asks if he’d like anyone else to join them. Sharrieff says, “Nope,” but all of a sudden, dozens of friends and family members jump out and yell, “Surprise!” He tells the crowd his woeful tale about Popeye’s, but he recalibrates into party hip hop mode, and everyone gets right into dancing.

This party… my god… is a Utah marvel. Jen’s armored leotard and sparkly boots look like what Michael Jackson would wear in the Thunder Dome, and the other women are dressed like they’re about to break out into the Mormon Rap. (Be warned, that video link is not for the faint of heart.) The ladies dance battle, and Whitney shows us the very definition of ‘White Girl Shuffle.’ HA! Lisa looks pleased as Whitney falls on her back trying to do a handstand, and then Jen does the worm, which earns her a medal.

I have to say that even though Jen is a mess with a hairline-trigger temper, she does throw amazing parties with amazing-looking food, so kudos to her for going all out! As Lisa and Meredith are outside playing golf, Whitney is double-fisting drinks and decides that NOW IS THE TIME to address Jen and Mary’s issues. Heather, based on what Whitney told her just yesterday, thinks they’re confronting Meredith and Lisa for talking smack on Jen.

The three congregate, and Whitney drunkenly launches into the Mary Story, and ugh, I don’t like this side of Whitney. I was so impressed with the way she handled the very difficult situation with her dad last episode, but Whitney’s timing for bringing up sensitive topics with the group suuuucks, and I’m significantly less enthused with her now.

After Jen absorbs Whitney’s word salad about Meredith and Lisa being afraid of her, steam shoots out of her ears, and she roars her terrible roars, gnashes her terrible teeth, and shows her terrible claws! Jen is PISSED that Whitney would bring this up here, now, on the day of Sharrieff’s birth, and she is not receptive to her whatsoever.

Lisa and Meredith overhear the commotion, and they head over to the group to investigate. Jen yells, “Let’s get this out f*cking right now. Are you guys scared of me? You talked sh*t about me to MARY?!” The party’s mood shifts entirely, and a ton of guests with large clocks around their necks are all, “Uhhhhh, what’s happening here?!” Lisa asserts herself and tells us she’s not afraid of Jen at all, and Meredith denies it as well. Whitney tells everyone she doesn’t like to gossip (sure, Jan), but then she drops the gossip bomb about what Jen said regarding Meredith’s possible other man!

Whitney is lighting fires left and right, and Meredith is NOT having it at all. She snips about Jen, “Perhaps people in glass houses shouldn’t throw stones,” and she is very ready to leave the party. Now that Heather realizes what is happening, she’s like, “Abort! Abort mission!” Whitney didn’t get the memo and is on a rampage. Lisa yells into Jen’s ear that she didn’t say a damn word about her to Mary, and Jen LOSES IT and throws her glass on the ground. (LOL at the guy cupping his mouth in disbelief.)

Jen runs off to Sharrieff and attacks some balloons, while Lisa screams at Whitney, “How do you feel about me? Because you’re telling Jen I said things that I didn’t say!” Meredith and Lisa leave together, and Whitney slurs at no one in particular, “Oh, I’m the asshole now.” Yes you are, Whitney. Sorry.

On the next RHOSLC, Meredith and Seth have some news to share with Lisa and John. Heather and Whitney have a powwow about Meredith and Lisa lying to them, and Mary attests that what they said to her about Jen is the truth. Then we get whisked away to magical Southern Utah, where Jen angrily splashes water out of a bathtub. Thank you for reading, Blurbers! Everyone stay safe out there. =)

TELL US – WHAT DID YOU THINK OF THE EPISODE? DO YOU THINK MEREDITH AND LISA TOLD MARY THEY’RE SCARED OF JEN? AND THE MOST PRESSING QUESTION OF ALL, DO YOU PREFER POPEYE’S, CHEF BOYARDEE, OR SUSHI?