RHOSLC Recap: Jen Tells Sharrieff How Angry She’s Been At Him, Whitney Apologizes to Jen About Hip Hop Party 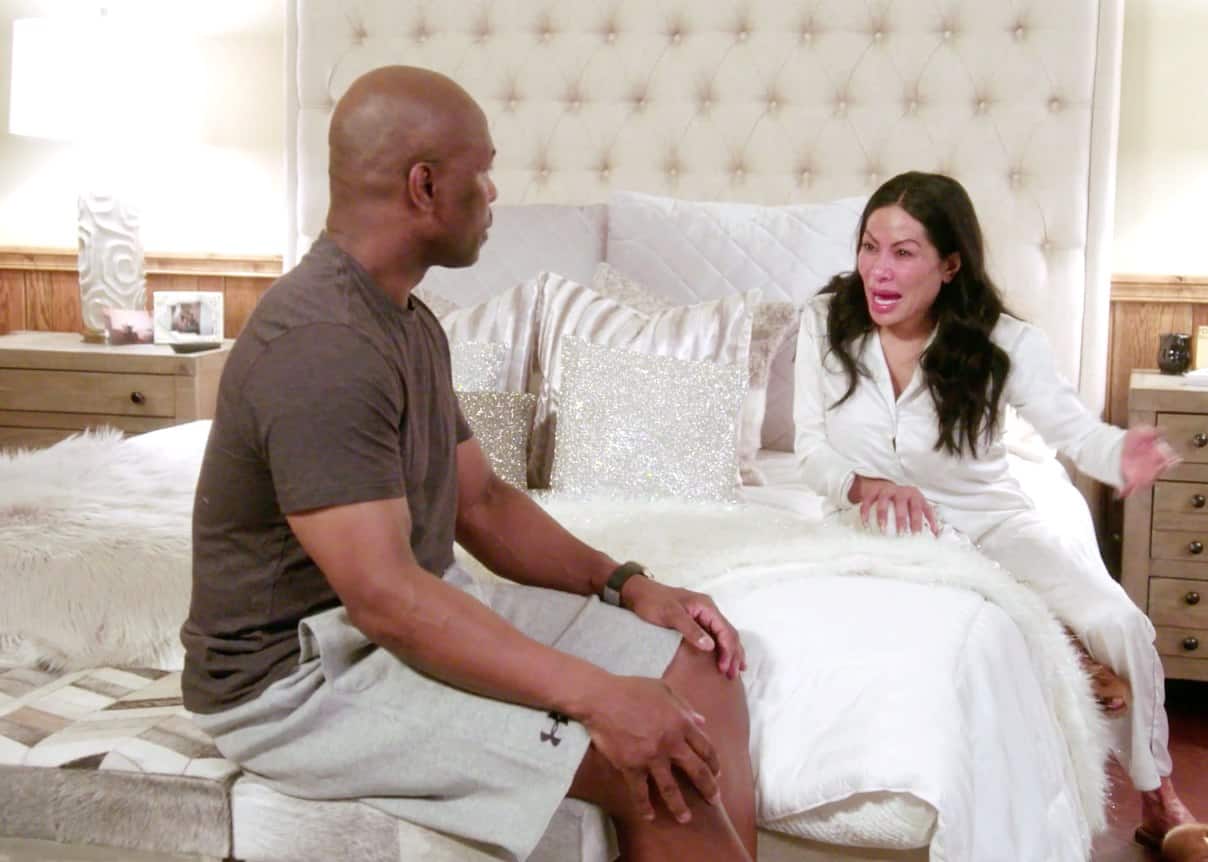 Howdy! In this latest episode of Real Housewives of Salt Lake City, the ladies head down south for some hot springs action, and before we get to the recap, I need to have a serious chat with you Blurbers… Gather ‘round and lean in close, for what I’m about to say might change your vacation plans once the pandemic is over:

If you have never been to Southern Utah, you are missing out on one of the most beautiful spots on earth. Dead serious. I love to travel and have seen some amazing sites all over the globe, but one thing that keeps me planted in Salt Lake City is that I live mere hours away from the most awe-inspiring, naturally sublime desert red rocks you will ever behold.

One time, I was taking a dip in the hot tub at Capitol Reef Resort, and I struck up a conversation with a French fellow. He was traveling with his daughter to hit the Big Five National Parks, and after some small talk, he told me in all seriousness, “This place is God’s Country.” While I’m not religious, I understood exactly what he meant. There is something undeniably spiritual that transpires when you travel down there. While our mountains (or “mown’uns” as they’re locally pronounced; the T is silent) are gorgeous in their own right, I’m telling ya: Get Thee to Southern Utah. It will cleanse your SOUL. Now onto the recap!

Jen Shah wanders through her empty chalet, and she looks extremely depressed. She is devastated that her husband’s birthday party went to shit, and she feels even more alone than she has all year because Sharrieff isn’t talking to her. Yikes! Now, I know some viewers think Jen fakes drama just for the cameras, but I have to respectfully disagree. Watching the way she beats herself up over losing her temper is something I can sadly relate to, and even though Jen needs to take it down a notch or five, I still find myself rooting for her.

Next, Whitney Rose meets Heather Gay at Beauty Lab, and they try to process what the hell happened at Top Golf the other night. Both ladies are in agreement that Whitney didn’t do anything wrong, and while I think that Jen’s outburst was ridiculous, Whitney wasn’t some angel at the party either. In all of her drunken sloppiness, she spewed A LOT of gossip to the entire group (minus Mary Cosby) at a totally inappropriate time, and I’m a little surprised Heather is backing Whitney on this one.

Both Whitney and Heather think that Meredith Marks and Lisa Barlow flat-out lied when confronted about telling Mary they’re scared of Jen. Heather goes even deeper, and she believes that 1) Meredith and Lisa aren’t real friends to Jen, and 2) Jen is discounting her real friendship with Heather and is trying to “trade up” by being associated with the slick-haired twins.

This whole fight seems pretty silly, to be honest. First, it seems like EVERYONE is scared of Jen, whether they admit it or not. When Whitney asks Heather to share with Jen the way she shares with her, Heather literally says she’s scared. And guess what? I would be too if my friend started throwing glasses after one too many drinks. That is very volatile, un-adult-like behavior.

Over at Meredith’s house, Brooks is nowhere to be seen, hallelujah! As Meredith and Seth get ready to go skiing, Seth fantasizes about having sex with ski goggles on. Meredith is game with the kink, and she adds that she could wear high heels while they’re at it. It’s cute that they’re back together and all, but I don’t need to imagine Seth and Meredith bumping uglies in ski gear. I just don’t.

At the Barlow house, Lisa tells John all about the party, and WOW, she cannot help herself when it comes to Whitney! Lisa snarks, “Utah women are good at two things: breeding and dancing.” LOL. Yes, dance culture is huge in Utah, and some people around here breed like jackrabbits, but c’mon, Lisa! Anyway, she, Meredith, and Jen are all individually pissed off at Whitney, and Meredith even goes so far as saying she doesn’t want to be around her anymore.

Now we’re at Mary’s house — lost in her closet — as Charlinda struggles to get a cheap-looking belt around Mary’s body. The pastor of Faith Temple Church strikes me as the type of person that wants to be buried with all of her possessions so no one else can enjoy them. Does anyone else get that sense or am I just being mean? Whitney FaceTimes Mary, and she gives her the lowdown about Jen’s meltdown at the hip hop party. Since Meredith and Lisa both denied ever saying they were afraid of Jen, Whitney wants to make sure she understood Mary clearly the first time. Mary is all, “Scary. Them. Jen. Me!”

Next, Heather and her business partner, Dre, check-in on the progress of her expanding Beauty Lab space. When Heather was married to Billy, she wouldn’t ever have been able to open her own business, and look at her now! Heather is looking to make a lot of money, honey, and she wants her place looking sharp. (I wonder if we’ll ever get to see it when it’s finished.)

In downtown Salt Lake, Meredith and Seth walk into Cucina Toscana for dinner with Lisa and John. The ladies are dressed alike, and Lisa says that’s because, “Class knows class.” Meredith and Seth declare that they’re back together and Seth is moving in! Good luck, you crazy kids! The women discuss how juvenile the drama was at Sharrieff’s birthday party, and Meredith is particularly upset with Whitney over bringing up the rumors about her marriage. Seth thinks Jen and Whitney “need to get a f*cking life,” and Lisa is “done.” Alrighty.

Whitney and Heather want to treat Jen to a spa day, so they have her meet them out in the middle of nowhere to sit in bathtubs… Okay, let me back up for a sec. Remember me waxing on about Southern Utah? Well, Mystic Hot Springs is actually in a tiny central Utah town called Monroe, but it has all the red rock good stuff, so it counts! As Jen passes a broken down Grateful Dead bus, she wonders, “Where the f*ck am I? Is it the movie set of Saw?” Nah, girl, you’re just in a hippie village where you can lounge in bathtubs outdoors! My stepson visited just last year and loved it.

The women hike up to the soaking tubs, and Jen looks like she wants to die. “Now Whitney’s going to have two apologies to make. For ruining Coach Shah’s party and for bringing me here!” Whitney thanks Jen for coming, and she explains that what she did at the party was born out of good intentions. Heather tries to blame herself for the mess, but Jen shuts that down quickly because, duh, Whitney was the one that brought the topic up.

Jen emotionally tells the women she is mortified Whitney would choose Sharrieff’s party as the place to discuss what the other women said about her, and she says that Sharrieff won’t even talk to her because he’s so pissed off. Whitney says the fiasco wasn’t her fault, and Jen LOSES IT. She splashes bathwater at a cameraman and breaks the fourth wall by shouting, “That’s what happens when you f*cking film me in a bathtub!” She jumps out of the tub and storms away, leaving Heather and Whitney aghast.

While Jen hulks out at the production crew, Heather pleads with Whitney to have some empathy and just apologize. Jen skulks back to the bathtub for the sake of her friendship with Heather, and Whitney climbs into Jen’s tub to apologize for picking the wrong venue to bring up what Mary told her. Heather admits that the whole ordeal was poorly timed on their parts.

Heather also says she thinks Jen wants to be Meredith and Lisa’s friend more than hers. My gut is wrenched when she explains that whenever she lets her guard down and shows her true self, people end up leaving her. Heather’s husband, friends… it’s all the same, and she’s dealing with some major PTSD over being hurt in the past. Jen jokes that if she’s getting a divorce, she’s moving in with Heather, and she reluctantly “forgives” Whitney.

Next, we get a weird scene with Lisa up in the mown’uns, acting like Ramona Singer. “I have a lot of frands, and they’re boss betches, and only the true VIPs get to join me at thess fancy dinner in a yurt.” This whole scene looks like one big Vida Tequila promo, so let’s move on… after we acknowledge that one guest’s crunchy hair. LOL!

Over at the Shah Chalet, Sharrieff finally comes home. Jen is terrified that he wants to leave her, and she doesn’t know what to expect when he takes her to the bedroom to talk. Sharrieff explains he needed some time away because he was so upset after the party, he didn’t want to say anything he’d regret. #Relatable. He doesn’t like when Jen drinks because she can’t control her emotions, and in the rawest Housewives scene I’ve ever witnessed, Jen ugly cries, “I drink to numb the pain because I’m so mad at you!”

Sharrieff not only missed Jen’s father’s funeral, but he also wasn’t around when she sat in the hospital for a week and had to make the decision to take her dad off life support all by herself. WOW. Sharrieff didn’t know Jen was holding so much in, and he looks heartbroken that she’s been hurting so badly. He says he’ll be better and be there for her more, and they have a good cry together. Hell, I’m crying too.

On the next RHOSLC, Whitney takes the girls down to Las Vegas, and Heather gets her Bad Girl on again (yay!). The ladies race around a NASCAR track, and Lisa confronts Whitney for her messiness at Sharrieff’s party. Heather and Jen get into it too! See you next week, Blurbers!

TELL US – WHAT DID YOU THINK OF THE EPISODE? WHAT IS LISA’S REAL PROBLEM WITH WHITNEY? WHO ELSE CRIED DURING JEN AND SHARRIEFF’S BEDROOM SCENE?