RHOBH Fans Upset Over Denise Richards Being Attacked at Reunion by Lisa Rinna and Costars as Denise Says She Was a “Punching Bag” For the Cast, Plus She Claims Producers Didn’t Show How Daughter Sami Truly Felt About Racy Dinner Conversation 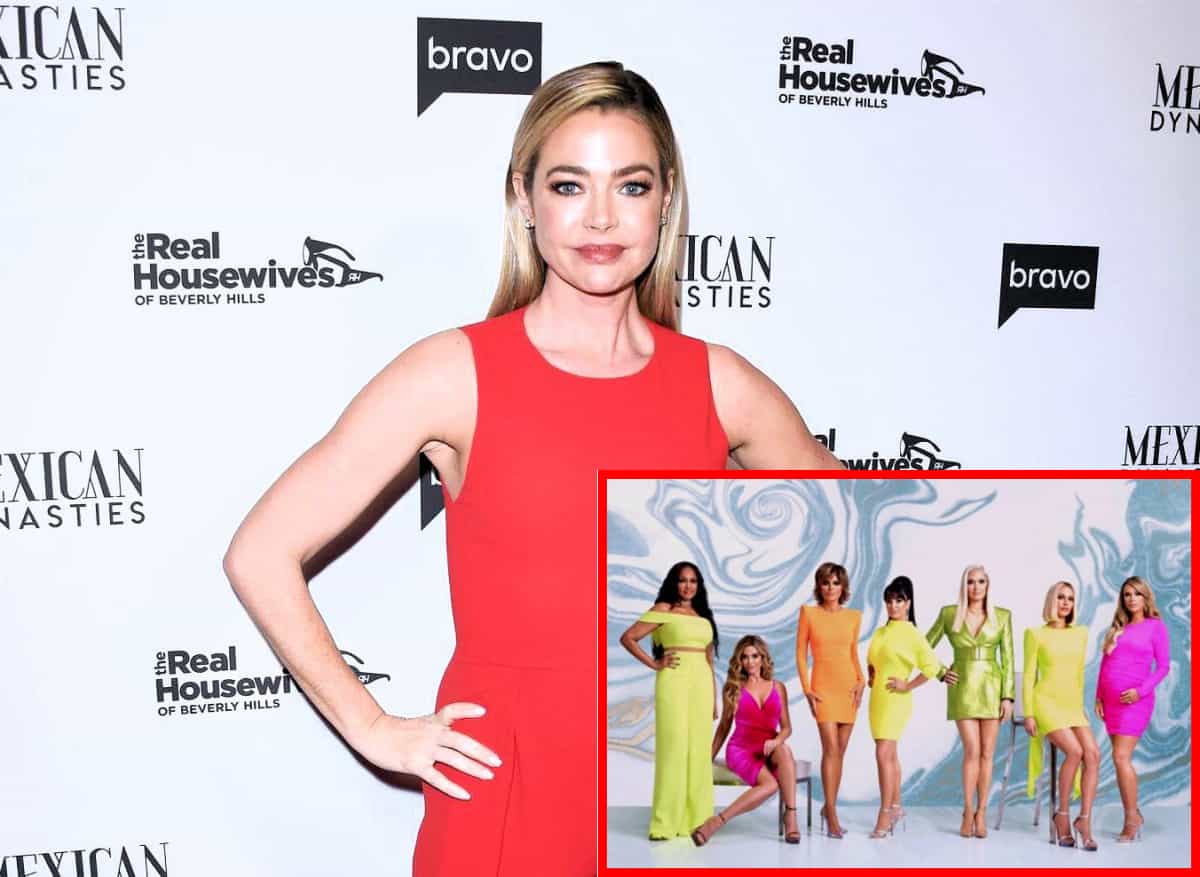 Fans of The Real Housewives of Beverly Hills have only witnessed the first part of the season 10 reunion, but many are already unhappy with what they feel is a gang up on Denise Richards. The star of the season, Denise, has definitely taken a lot of that on and is airing out her grievances.

The actress and reality star took to Twitter following the first episode of the three-part reunion to discuss a little bit of what went down, noting how “exhausted” she was toward the end and how much she “learned” while watching back the drama of the show.

One follower pointed out the “fault” of the Bravo network for allegedly “hating on” Denise this season, taking issue with how production approached Denise on the Rome trip and “bad mouth[ed]” her to Garcelle Beauvais after Dorit Kemsley‘s party.

“Learned a lot by watching it all back,” Denise responded, seemingly agreeing with the fan’s sentiments about what went down.

Learned a lot by watching it all back.

Other followers came to Denise’s defense, pointing out the harsh conflict between her and Lisa Rinna specifically.

“I can’t believe they allowed Lisa to act like a complete maniac like that,” the user wrote. “I know Andy is messy but this was too much. He egged them on. I’m just in shock. Never seen anything like this.”

RELATED:  Brandi Glanville Shades Dorit Kemsley: “Honey Go Find a New Accent,” Plus She Denies Being a “Bad Person” to Lisa Vanderpump and Defends Kyle as the “Mother Hen” of RHOBH

“It was about 8hrs. I was exhausted at the end,” Denise replied, detailing the grueling effects of the reunion taping.

It was about 8hrs. I was exhausted at the end.

There were more messages from fans supporting Denise against what they felt was an unfair attack by some of her castmates.

Someone HAS to tell these women that Denise doesn’t have to work to make them look bad. They do it to themselves every season. #RHOBHReunion #RHOBH pic.twitter.com/Wa0NI4iWTQ

Rinna: “Have you seen how the fans have come at us, Denise?”
All of us fans who watched the season for ourselves:#RHOBH pic.twitter.com/bhHMiD0bZ8

The mother of three also had to defend herself against some critics, noting the RHOBH cast’s tendency to come for her for the same thing “over and over” as her reason for walking away.

“Denise f–king Richards WALKED AWAY the entire season,” one fan protested. “What could have been solved [when] 1 episode went on for an entire storyline because she literally walked away every difficult conversation[?]”

“How many times can you talk about the same thing over and over,” Denise shot back. “A person can only take so much. Others leave, why is it ok for them? I just happened to be the punching bag almost every dinner.”

RELATED:  RHOBH’s Teddi Mellencamp Accuses Denise of Taking a “Cheap Shot” With Claims of Living in Her Dad’s Shadow and Claims Denise’s Kids Will Likely Grow Up With the Same Stigma, Plus She Accuses Camille of Twisting Things 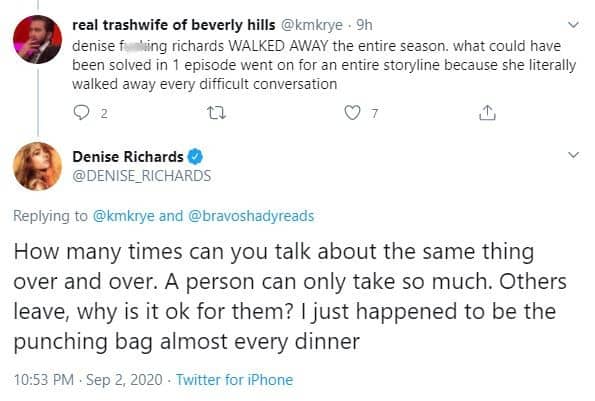 Another fan accused Denise of lying on the show, saying she “exaggerated” her daughter’s reaction to the “sexual talk” between the women at her party.

“Do you think everything we shoot ends up on tv?” Denise responded, insinuating there was more to the story production decided not to show. “I also said I don’t give AF about it if they keep bringing it up.”

Do you think everything we shoot ends up on tv? I also said I don’t give AF about it they kept bringing it up.

In the end, Denise mostly received praise from fans, with many more coming to her defense — especially against her apparently now arch-nemesis, Lisa.

“Wow Rinna is mean to the core. My heart is broken for Denise,” one follower wrote. “Well done Rinna. You made America love @DENISE_RICHARDS even more.”

“Thank you,” Denise simply responded, happy some of the viewers were in her corner.

The second part of The Real Housewives of Beverly Hills reunion airs next Wednesday at 9 p.m. on Bravo.