RHOA Recap: Porsha Not Happy Cynthia Is Inviting Ex Dennis To Wedding, Plus Cynthia Gets Grief From Mom For Inviting Dad 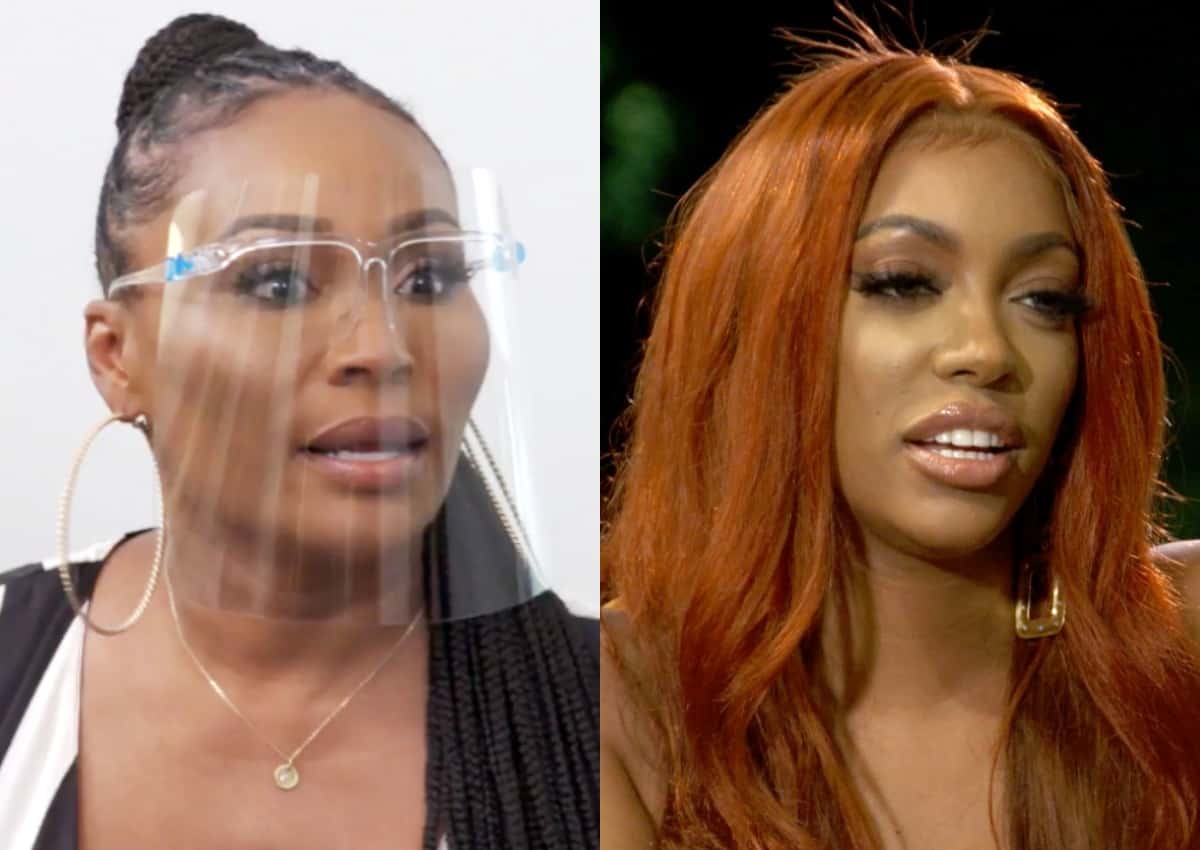 This week on the Real Housewives of Atlanta, Cynthia is dealing with the backlash from her family since she extended a wedding invite to her dad. Kandi is putting on a food drive for single moms. Let’s catch up with these Georgia peaches before things really go off the rails, shall we?

It seems like this season is a very SLOW buildup to what we all heard is going to happen with all of the stripper drama. I hope you all can hang on with me till things get more interesting. I promise you all based upon those insane previews that it is going to get as juicy as a Georgia peach!

Cynthia and Mike are going over the guest list and thought only 100 people would come because of COVID. They invited 250 people but 167 willing victims confirmed. Mike wants to invite Dennis, the hot dog king, since you know that production has their hands all over that messy invite to incite drama.

Cynthia wants to invite her dad, but their relationship is strained. She most likely is going to do this despite her mom’s issues with her father.

Cynthia’s mom Barbara did a PSA about domestic violence and it wasn’t complimentary to her dad. Barbara claims he is extremely jealous and there was a confrontation between them. This led to Barbara drawing a knife on him. Cynthia is worried her mom will be upset that he is attending and won’t want to be in his presence. She wants everyone to play nice and have both her parents attend. I think Cynthia may be selfish in not respecting her mother’s feelings.

Drew and Ralph are packing up their house so they can move into the house that he chose. She essentially put up the cash for it but had no input on it. Can you say controlling chauvinist?

Ralph is discussing how losing his dad has affected him since they didn’t really have a close relationship. He feels that he missed out on opportunities to spend time with his dad. They release balloons to honor his dad and also agree to continue supporting each other. Side note: I am really undecided on that blonde wig on Drew, and more importantly, will these two make it?

Kandi shares that she created a grocery giveaway called Kandi C.A.R.E.S. She wants to be able to do something positive and help people who are struggling. Kandi has a goal to serve 750 families. What a great way to give back during these trying times!

Kandi discusses how Block hasn’t paid his child support totaling $92k. She hired Mike Sterling, who I used to swoon over, to help her resolve the issue. I know there probably are people who would question why Kandi would push for that money when she is wealthy in her own right. Kandi is correct in saying that Riley’s dad has the means, so he should have fulfilled his financial obligations to his daughter.

Kandi’s makeup artist is questioning if the judge will award child support to her. She thinks because she is rich that she doesn’t have the need. Kandi gets a little riled up over this since the money was for supporting Riley. Riley would like to have the money now to pay for her college expenses and her own future.

Porsha, with an ugly red wig, is meeting with Cynthia to discuss the wedding. She obviously already knows about the dirty dog invitation to Dennis. Cynthia wants to know the status of their relationship. Porsha is still struggling over the affair and feels very insecure. She doesn’t like that she is losing herself and they are fighting in front of the baby.

Porsha has gained 20 pounds during the quarantine. She is rightfully punishing Dennis for breaking her heart. Porsha is dealing with so much craziness outside the house and she wants sanity in her own home.

Porsha thinks that Cynthia should have enough cootchie credit to ensure that Dennis’s invitation is rescinded. I guess Porsha thinks that’s how it works, and she must have cashed in her credit vouchers since she is still getting loaded up with expensive gifts from Dennis.

Cynthia calls Noelle, who is living in LA and is an Instagram influencer. She loves living there and is doing really well with her new career. Cynthia is upset that Noelle can only come for two weeks because she has work commitments. Noelle is another RHOA kid that is growing up right before our eyes. WOW, times flies on these shows.

We are now at the Kandi C.A.R.E.S. food drive event for single parents. She has enlisted the ladies to help with her event. Porsha, Kenya, and Tanya arrive to assist with this awesome event. Side note: I don’t know about you all, but doesn’t Tanya seem to be really overacting when she gets camera time? I think each season she is auditioning in the hopes that she will get a peach the following season. Sorry, I digress, but she is really trying way too hard.

Kenya has to be super shady in her ITM by suggesting Porsha is only there for a photo op. She is being Miss Bossy pants and ordering the other ladies around. Get over yourself, Ms. Moore-Daly!

Cynthia and Mike just picked up their marriage license. She isn’t taking any chances with this one when the other one was held for ransom by her family. Cynthia is marrying this man hell or high COVID positive cases!

Kandi tells Porsha that Dennis wants to come to the wedding but doesn’t want Porsha to bring a date. Why is he able to dictate whether or not she brings a date? Kenya gets all snotty about it because she is green with envy that Porsha has someone who still wants to be in her presence.

Todd and precious little Ace arrive to help for this awesome cause. Marlo shows up when it is essentially lunchtime. She does bring $5k to assist in the cause. Kenya thinks she must have received another tip from her sugar daddy to be able to fork over this cash. In Kandi’s ITM, she mentions that she is grateful for those that gave, but SOME people aren’t as generous as she would have expected. Is she referring to Kenya?

Cynthia and Marlo talk about how they like Drew. Kenya has to be nasty and thinks Cynthia has taken her in just like a stray cat. Please stop with this crap, Kenya, jealousy isn’t a good look for anyone!

Drew calls and Kandi thanks her for her contribution. See, I told you all, it seems like everyone has made contributions! So by process of elimination, we know who the thrifty nickel is!

Kenya claims that she and her new BFF, Latoya, the thirsty wannabe peach, were talking about planning something fun. They both thought things need to be turned up and everyone needs a break from quarantine.

Kenya wants to plan a getaway to the beach. The other ladies mention they are tested weekly for COVID. They should be for a multitude of reasons since they don’t wear masks most of the time filming and they are all going to that super-spreader wedding.

Cynthia and Noelle are driving to see Barbara. Noelle is obnoxiously taking selfies in the car instead of chatting with her mom. She is serving face just like Cynthia did for all of those years. That peach doesn’t fall far from the tree!

Cynthia shares that she is inviting her dad to the wedding. She mistakenly thinks that Noelle will have her back with her granny. I think Noelle is going to be loyal to Granny on this issue.

They arrive at Barbara’s house and Cynthia’s sister Mal is there as well. They came expecting lunch but the pork chops are gone. You snooze you lose when you arrive late.

Cynthia brings up inviting her dad to the wedding. She is met with some very uncomfortable stares. Barbara wants to just put her mask over her eyes. She is upset that Cynthia gave credit to her dad in a post recognizing some happy memories. Barbara is very prickly over her daughters showing any favoritism to their dad. She was both their mom and dad. Barbara is resentful that he wasn’t financially supportive of his daughters and doesn’t think he should get accolades for being a good parent.

Barbara doesn’t appreciate that she was set up for that PSA. She didn’t know it was about domestic violence. Barbara got grief since she shared her story. Their family and friends thought she was wrong airing dirty laundry since he was a god-fearing man.

Noelle is sticking up for her granny and she thinks she should be respected. She has no relationship with her grandfather. Cynthia feels bad that her mom was trapped in a relationship with her dad because she got pregnant with her. Noelle wants her to put granny first since she always makes them a priority.

Cynthia claims she hears her and will take it into consideration. I am not too optimistic since she is ignoring the warnings about COVID but is still pushing forward with a large wedding. We will have to wait and see if she puts her mom first this time!

For the next few weeks, we are going on an EPIC girls’ trip to South Carolina. Oh my stars, this season is finally going to get lit up! Have a wonderful week, everyone, and see you all next week!

TELL US — DO YOU THINK CYNTHIA SHOULD RESPECT HER MOM’S WISHES? SHOULD DENNIS BE INVITED TO THE WEDDING?