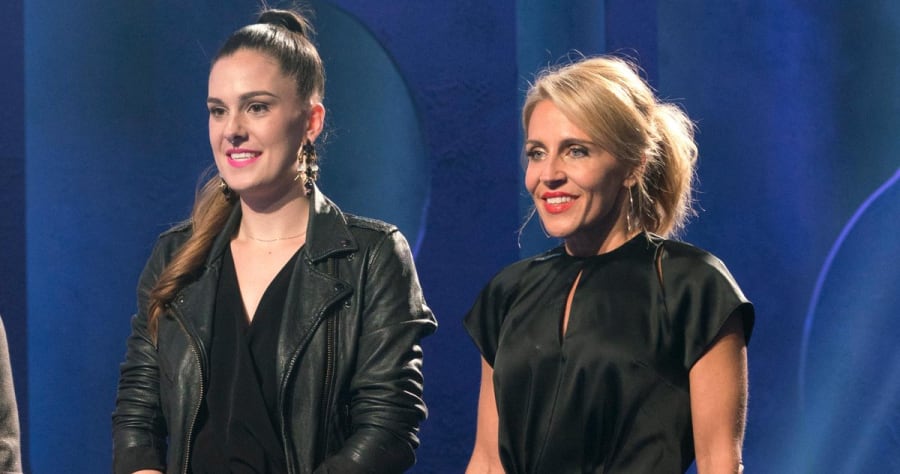 For the second week in a row, “Project Runway” Season 16 ended on a twin-related cliffhanger. It has been annoying both times, but in Episode 8 it was also confusing.

After Shawn basically quit so she wouldn’t have to compete against her twin Claire, Claire rallied and made a pant and top for the “Client on the Go” challenge. Throughout the episode, fans were shown confessional interviews from Margarita dragging Claire for copying her previous look. But the top Claire presented looked nothing like what Margarita made before.

However, there was a key moment during the 1.5-hour episode when Margarita and Michael spoke to each other in Spanish. Margarita said something about seeing Claire in the bathroom — apparently in the hotel/apartments, outside of the PR workroom — using a measuring tape to measure her own pants to use as a pattern for challenge designs. 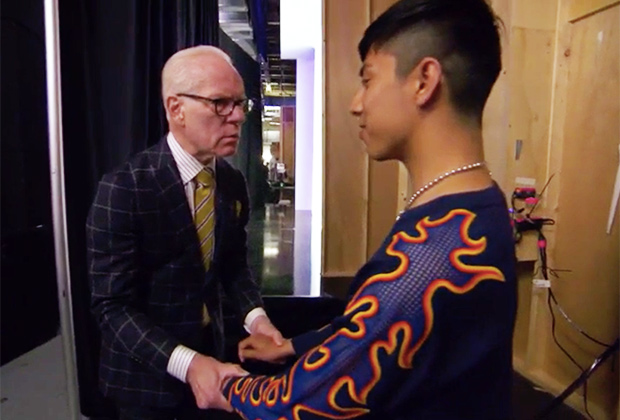 That seems to be the cheating allegation, since you’re not supposed to do any design work outside of the workroom and away from cameras. But that — and/or whatever else is going on behind-the-scenes — wasn’t made 100 percent clear on the show, because no one spoke up on the runway after Claire won the challenge and Michael walked out.

All we heard from Michael was what he said backstage:

“I came to play fair, and there is no fairness in this game.”

The episode ended with Tim Gunn planning to investigate. Next week’s Episode 9, “A Little Avant Garde,” airs Oct. 12 and has this synopsis from Lifetime:

“The fallout from the cheating scandal rocks the designers and leaves everyone wondering how they will move forward in the competition; the designers must create an avant garde look inspired by Shopkin’s characters.”

The main Season 16 promo already teased a bit of what’s ahead, including Tim Gunn unloading to the camera:

“This is cheating. It all has to stop.”

That was followed, in the promo, by a scene in the workroom, with Tim saying, “This entire thing disgusts me. It was unprofessional, unseemly, atrocious.”

That seems to be ahead, but the way Thursday’s episode left it, fans were confused on the exact cheating allegations. Claire’s look didn’t seem like what Margarita made, so some wondered why Michael and Margarita were so upset. Others who read the Spanish subtitles from earlier in the episode mentioned the pattern copying:

Can someone please tell me why you’re defending michael? Where was there any unfairness on Claire’s end? So dumb #ProjectRunway

Margarita/Michael think Claire cheated but they can’t use that as an excuse as to why they had horrible designs this week. #ProjectRunway

So a couple of things about PR tonight:

1. I get why they didn’t say anything. The judges and Tim have let a LOT slide.#ProjectRunway

2. This isn’t an extension of twins hate. Claire went from copying Margarita to copying her pants and Shawn’s top. #ProjectRunway

3. Over the course of one episode, she copied THREE looks. THREE. And somehow she still won. #ProjectRunway

The fact that Claire didn’t even use the top that got Margarita so flustered is HILARIOUS!!! #projectrunway pic.twitter.com/jZUozSXeYv

Did nobody else read the subtitles?! Claire took the pants she was wearing & measured them 2 make the pattern of her design #ProjectRunway

Claire’s original print for the Dixie Cup challenge looks like a b&w version of the OG Dixie cup, but 🐸☕️ #ProjectRunway pic.twitter.com/FM1sWuhNZs

In terms of “cheating” scandals, back in Season 3 in 2006, Keith Michael was the first designer kicked off PR for breaking the rules, including having pattern-making books in his room. At the time, Tim Gunn said (via Reality Blurred):

“We have very clear and concise rules for designers on ‘Project Runway.’ One of the absolute no-nos is no fashion how-to books. None of any kind. Keith’s possession of the books was brought to the producers attention by Kayne; the producers in turn informed me. […] And in a separate incident that happened off-camera, Keith left the production without permission for several hours and used the Internet which were additional violations of the rules.”

Next week’s episode will reveal the fallout from the Michael/Margarita/Claire cheating scandal situation, but to many fans the biggest question is how Claire’s look won that challenge at all. She got $25,000 for that?