Nicolas Cage Not Happy About Being the Face of Japanese Snack 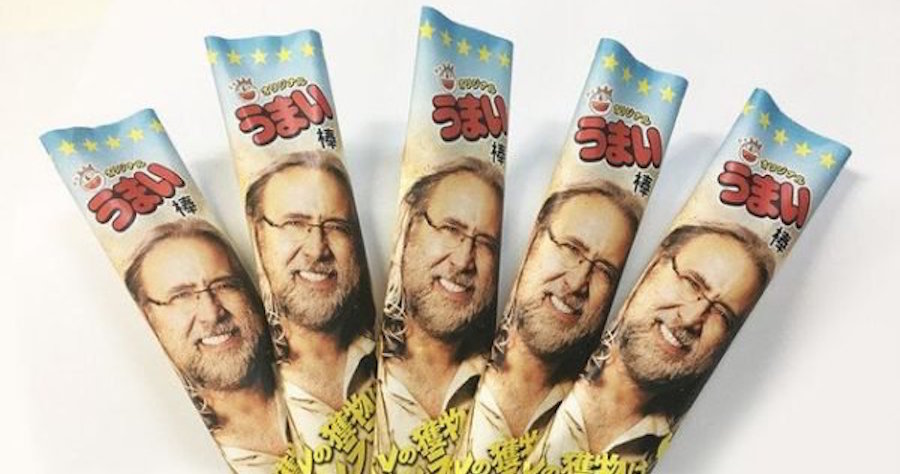 In some of the oddest Nicolas Cage news ever, he’s currently denying he endorsed a Japanese snack with his face on it. The Japanese corn snacks were set to be handed out to advance ticket buyers of his “Army of One,” a comedy about one man’s hunt for Osama Bin Laden.

What corn snacks have to do with hunting terrorists, we’re not quite sure. We’re also not sure who would want these treats or who authorized them in the first place.

Earlier this month, Umaibo tweeted out an image of the “Deluxe Umaibo Nicolastick” featuring Cage’s face. Then FilmNation, international distributor of the movie (which is also called “Bin Laden is My Target”), issued a statement denying that Cage had endorsed the product, which translates to “delicious stick.”

A spokesperson for Tokyo-based Yaokin, the Umaibo’s sales company, told THR that they were surprised to hear about FilmNation’s statement: “It wasn’t that our company or Riska, the manufacturer, just decided to make them. We were asked to do it by the film distribution company. We’ve done them for loads of films in the past, all the way back to a Sylvester Stallone one for ‘Rambo,’ with no problems.”

Looks like you missed your chance to get your hands on a Nicolasticks: Only 600 were made in the first place. They’ve now been withdrawn in favor of a postcard giveaway.

THR points out that Cage previously did a series of ads for Pachinko machines, where he sang this little ditty: “My favorite things: blue jeans, a red-haired girl, sweet peanut butter, a cup of tea and a good book, a dance with a reindeer and also… PACHINKO…. yeah, PACHINKO!”