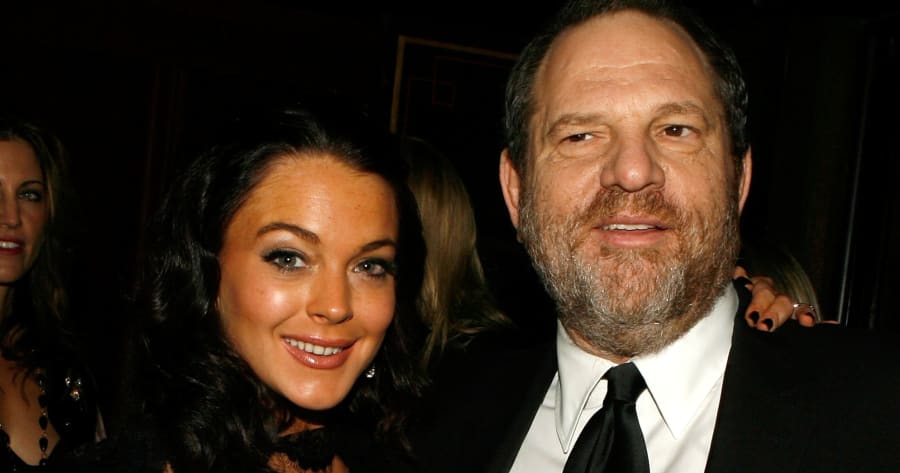 Lindsay Lohan just jumped head-first into the Harvey Weinstein sex scandal, telling everyone to back off, and saying his wife needs to “take a stand and be there for her husband.”

Why did she feel the need to chime in? Who knows. It’s LiLo. Her hair is full of secrets.

Stories have been pouring out this week about producer Weinstein’s alleged sexual harassment, assault, and rape of Hollywood actresses. He was fired from The Weinstein Company, disavowed by many industry stars, and — as of yesterday — left by his wife, designer Georgina Chapman.

Lindsay Lohan is heartsick about it all. In a now-deleted Instagram story, she defended Weinstein and called on his wife to stand by her husband:

“Hi, this is Lindsay Lohan. I’m in Dubai. I’m home. I feel very bad for Harvey Weinstein right now. I don’t think it’s right what’s going on. I think Georgina needs to take a stand and be there for her husband. And he’s never harmed me or did anything wrong to me – we’ve done several movies together. And so I think everyone needs to stop. I think it’s wrong. So stand up.”

lindsay lohan (and her whack accent) is defending Harvey Weinstein on her insta rn. GOODBYE TO YOU FOREVER. pic.twitter.com/aMzvAOXPYp

That message is no longer on her Insta, but it is all over the Internet, and the Internet has reacted with disgust:

Lindsay Lohan thinks it’s wrong that women have come forward about Harvey Weinstein’s sexual abuse because he’s never done anything to her and he should be left alone… wow.

Nobody can ruin her career faster than Donna Karan

Some fans are defending her, though, arguing Lohan may be traumatized from her own past:

Question: does anyone honestly get any pleasure out of piling on Lindsay Lohan at this point? She clearly needs help. Has for a long time.

Yeah, she is taking an eyebrow-raising stand here, and fans are responding with fair points, but piling on doesn’t help. It’s just the mob mentality kicking in and doing more harm than good.

At least Harvey Weinstein can take comfort from having Lohan as his champion. Unless he wishes she stayed quiet.