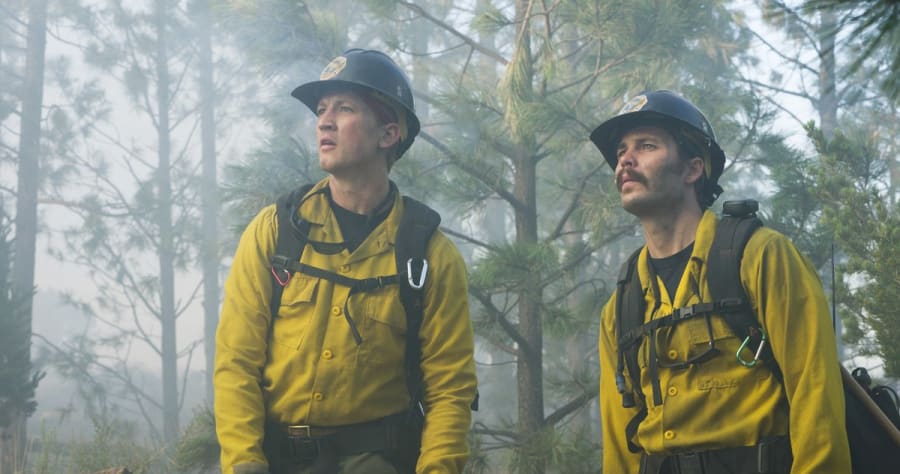 Director Joseph Kosinski is known for his glittery sci-fi vistas and technologically-ambitious concepts. But the filmmaker behind “Tron Legacy” and “Oblivion” has set his sights on a more earthbound experience with his new film, “Only the Brave.”

The film follows the true-life story of the Granite Mountain hotshots, a group of highly-skilled firefighters that set fires to combat and control wildfires, who met a tragic end in June 2013. It’s unlike anything Kosinski has ever done.

Instead of some grand visual effects breakthrough taking center stage, the emphasis is on the human drama, beautifully acted by an all-star cast that includes Josh Brolin, Miles Teller, James Badge Dale, Jeff Bridges, Taylor Kitsch, and Oscar-winner Jennifer Connelly. It really is something, full of awe and terror and deep emotions.

We recently got a chance to sit down with Kosinski to talk about his big departure, wrangling such an amazing performance out of Taylor Kitsch, and how they brought those fires to life.

MOVIEFONE: What drew you to this project? It is a big departure.

Kosinski: Well, that’s one thing: it’s different. I’d done two science fiction movies and, all of a sudden, you find yourself being sent every science fiction script. But I’d gotten my hands on an early version of this draft and I read it, and I was almost embarrassed that I didn’t know these guys existed. I, like most people, assumed that they were firefighters like we’re use to seeing around in the city. I never knew that these guys go out there without water and fight fire with fire. The story of Eric Marsh, the story of Brendan McDonough, one at the very top and one at the very bottom, who are brought together through the circumstances of this film, was very inspiring.

I thought this was a movie that I’d love to show my kids when they’re old enough. This is the case of a movie that can actually make a difference and show us what real heroes are like. I love going to the movies for pure entertainment, and there are a lot of movies made for that these days, but this felt like a movie that had more to say and was important to get out there.

There’s so much terminology and so much of the nitty gritty that you get across in the movie. How did you weave that through without feeling like an instructional video?

It was tricky. I had a lot to learn about wild land firefighting. I have found that audiences like it when you don’t dumb it down. They like to have that terminology. They like that realism. They like seeing firefighters talk like firefighters. We did it in a way where if you heard a term, you understood it either visually or in the script what it meant. Then we were able to use it the rest of the way through. But it was a huge learning process.

I was interested in your approach to the material visually, because I had figured it’d be a little looser. But there are only two handheld shots in the entire movie.

Yeah, there are only a couple.

Listen, my style has always been a bit more classical in terms of letting the camera create the tableau and letting the action happen inside of it. I didn’t want the style to get in the way of the story. I knew with this film that the strength was in the story and the performances because of the cast. I wanted the performances of the actors to take the front stage. I didn’t want fancy camerawork or visual effects to get in the way of that. But that being said, the visual effects that are in the movie are extremely sophisticated because what we are depicting is one of the hardest things to do from a visual effects point of view. The idea was, how do we make the fire that we created visually blend seamlessly with all of the stuff we accomplished in-camera.

That must have been incredibly difficult.

There’s never really been a movie made about this subject.

And now I know why — because it’s really hard. There’s a movie from 1959 called “The Red Skies of Montana” that was shot during a real wildfire, so that’s how they were able to capture that. But, yeah, this is a really hard thing to capture. We shot real wildfires. We created our own wildfires. We sent the actors to hotshot camp so they knew how to start wildfires. We had to do a lot to do ahead of time.

Can you talk about working with Jeff Bridges again? Must have been nice to not have to digitally de-age him or do anything crazy.

It was fantastic. Just to be able to work with Jeff as an actor and not have all that technology to work with. On “Tron,” we were juggling so much. It was such an ambitious undertaking. We also had Duane Steinbrink, who Jeff plays in the movie, and was with us the whole time. So we had that amazing ability to have Jeff play a guy who we can talk to and hear stories from.

What’s nice, too, is that it isn’t just some rah-rah patriotic thing. There’s more to it.

Another surprising aspect of this movie is Taylor Kitsch, who is just incredible. Can you talk about working with him?

I had met Taylor before and knew I wanted to work with him on something. It speaks to the power of the story that I was able to get those six actors together in one film. Each of them could shoulder their own film. But the sign of an amazing actor is when they take a role like Taylor did with Chris MacKenzie, and make it stand out. It really feels like a much bigger role and that’s because he made it that. It allowed Taylor to show a side of his personality that I haven’t seen him do a lot.

“Only the Brave” opens everywhere this Friday.