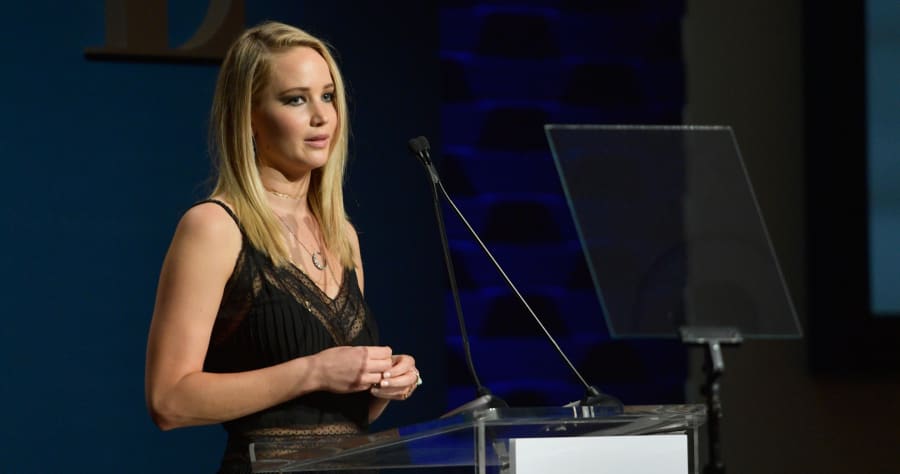 In the wake of the Harvey Weinstein scandal that has rocked Hollywood, multiple women in the film industry have come forward with similar tales of sexual harassment and assault. After Reese Witherspoon shared her own story at Elle’s Women in Hollywood event on Monday, fellow Oscar winner Jennifer Lawrence also opened up about her experience as a young actress who felt degraded — and powerless to change her circumstances.

Lawrence, also speaking at the Elle event, told attendees about her work on an unnamed film early in her career, where she was asked to lose 15 pounds in two weeks to keep her job. But the request soon became even more upsetting and personal.

“One girl before me had already been fired for not losing enough weight fast enough,” the actress said. “And, during this time, a female producer had me do a nude lineup with about five women who were much, much thinner than me. And we all stood side-by-side with only paste-ons covering our privates. After that degrading and humiliating lineup, the female producer told me I should use the naked photos of myself as inspiration for my diet.”

Lawrence is known for speaking her mind, yet she says that didn’t make a difference on this specific occasion. “I asked to speak to a producer about the unrealistic diet regime and he responded by telling me he didn’t know why everyone thought I was so fat, he thought I was perfectly ‘f*kable.’

The actress went on to say that as a young actress just starting out, she knew her complaints would fall on deaf ears, an all too common refrain from fresh-faced stars.

“I let myself be treated a certain way because I felt like I had to for my career,” Lawrence said. “I was young and walking that fine line of sticking up for myself without being called difficult, which they did call me, but I believe the word they used was ‘nightmare.'”

Lawrence said the tide eventually turned for her when she joined the “Hunger Games” franchise and became “a movie star” who had “the power to say no.”

“But what constitutes this power?” she continued. “Every human being, no matter how successful they are, should have the power to be treated with respect because they’re human.”

The actress went on to pledge solidarity to “any boy, girl, man, or woman who does not feel like they can protect themselves.”

“I want you to know we’re here for you,” Lawrence said. “We’re all here for each other. Together, now, we will stop this kind of behavior from happening. We will stop normalizing these horrific situations. We will change this narrative and make a difference for all of those individuals pursuing their dreams.”

[via: Elle, The Hollywood Reporter]