Isla Fisher Is Not Amy Adams, But Someone Still Needs to Tell Lady Gaga 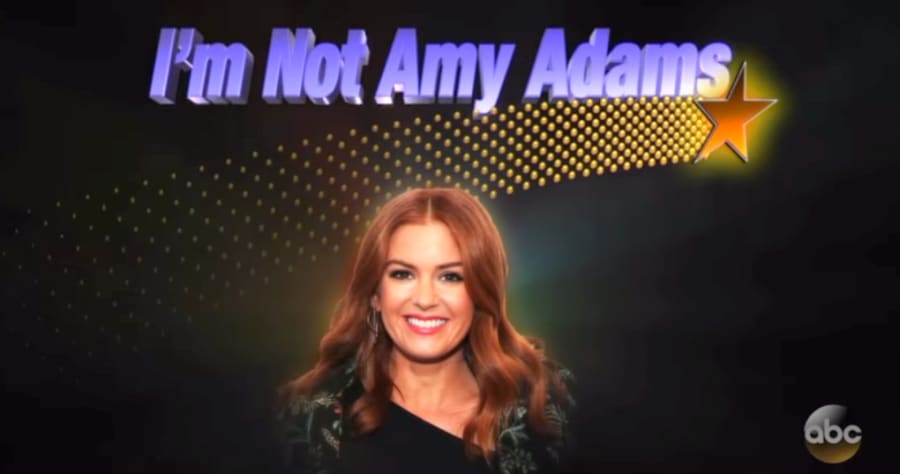 Isla Fisher was not in “American Hustle.” She was not in “Enchanted.” She is not Amy Adams. OK, they were both in “Nocturnal Animals,” and that was confusing, but Not All Gingers Are the Same. (Not even Jessica Chastain and Bryce Dallas Howard, although … are we positive?)

Isla Fisher was just on “Jimmy Kimmel Live” to promote her new book, and Kimmel said he was Googling her name, and saw that “Amy Adams” often pops up with it. He asked the Australian “Wedding Crashers” star if people often confuse her with the five-time Oscar nominee. Fisher answered:

“Yes, they do, and I usually correct them. Sometimes I don’t. A couple of times I can think of it’s been quite funny.”

Fisher said she was once at one of those fancy Hollywood parties, and she was all dressed up at the bar…

“The crowds parted and there was Lady Gaga, and she’s heading right toward me. And she said, ‘Thank you, your performance in ‘American Hustle,’ Amy, was [amazing].’ And I’m thinking ‘Oh my gosh, It’s Lady Gaga, I love her so much, I don’t want to tell her the truth.’ So I just gracefully thanked her, bowed my head. And then she wants to talk about the performance, and now I’m thinking, ‘I don’t want to be a liar.’ And then I look over her shoulder, and there’s Amy Adams walking into the party. So I’m like ‘There’s Isla Fisher.’ I said, ‘She’s not even nominated for anything, what’s she doing here?'”

Hahaha. Fisher added another quick “low point” story on the subject. She said she was at an IKEA with her newborn baby (one of her three with husband Sacha Baron Cohen), exhausted and just trying to take a breath in the corner when a woman and her two kids approached her. They were so excited to meet “Amy Adams” and asked her to sing a song from “Enchanted.” So she got out a few notes before they realized their mistake and backed away.

How much of those stories is really true and how much is exaggerated? Doesn’t really matter. Her “Kimmel” video is gold (or ginger?) and ends with a great PSA to make it clear that Isla Fisher is not Amy Adams:You may recall when Bryce Dallas Howard and Jessica Chastain promoted a (really catchy) PSA song that attempted to differentiate them. And Chris Pine’s “SNL” monologue included a song to help separate him from the other Chrises.

Some fans really have been living in ginger confusion all this time:

Damn i always thought it was Isla in Enchanted https://t.co/r7qGgVNCKh

I watched Nocturnal Animals all the way through, then saw the credits and said, “Isla Fisher was in this?”

Update: I thought Amy Adams was in more movies because she is the doppelganger of Isla Fisher.