How ‘Boo 2! A Madea Halloween’ Scared Off All Box Office Rivals 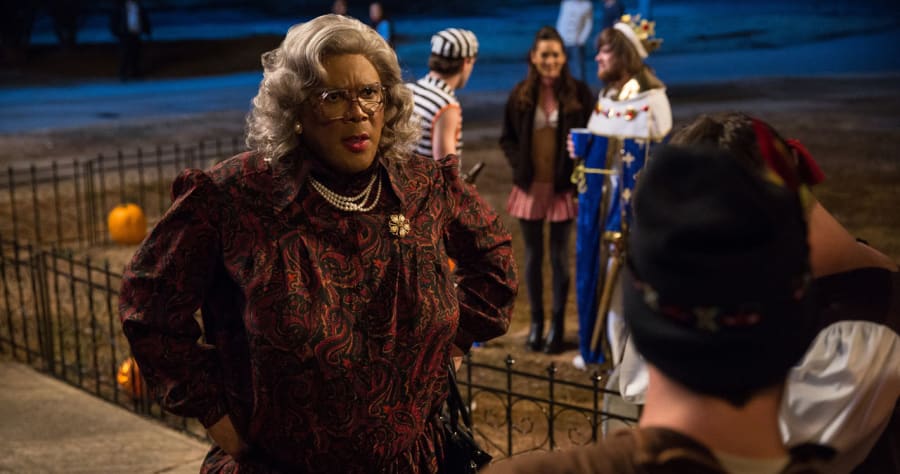 As predicted, Tyler Perry‘s “Boo 2! A Madea Halloween” premiered on top, with an estimated $21.7 million. That’s a solid number but still well below the $25 million some pundits predicted and 24 percent below where its predecessor, “Boo! A Madea Halloween,” opened a year ago.

If this weekend’s dismal results were predictable, the lessons they offer are not. Here are the takeaways:

Tyler Perry’s morality plays aren’t all hits, but every time he dresses up as gun-toting granny Madea, he’s all but guaranteed an opening above $21 million. Last year’s comedy “Boo! A Madea Halloween” was one of his biggest Madea hits, premiering with $28.5 million. If it ain’t broke, don’t fix it; “Boo 2!” comes out exactly a year later, working the same horror-spoof formula. Critics didn’t think much of either film, but Perry’s movies are critic-proof. “Boo 2!” earned an A- at CinemaScore from the largely older female audience that is Perry’s base, suggesting that word-of-mouth will be strong enough to keep the popcorn flowing at least until trick-or-treat time.

Nonetheless, many older viewers still care what critics have to say, and the reviewers were merciless regarding “Geostorm” and “The Snowman.” In hindsight, neither movie was poised to earn critics’ favor, not just because of what’s on screen, but also because of what went on behind the scenes.

“Geostorm” has taken three years to reach the screen since production began under director Dean Devlin, the longtime producer of Roland Emmerich‘s disaster films, making his directing debut with a disaster movie of his own. After sitting on the shelf for two years, the rough cut underwent an additional $15 million worth of reshoots under another director, along with some radical re-editing. After all that, Warner Bros. still seemed to have little confidence in the $120 million would-be blockbuster, since the studio didn’t schedule any Thursday night previews. No wonder critics thought something was fishy, resulting in a Rotten Tomatoes rating of just 13 percent fresh. Audiences didn’t think much of “Geostorm” either, giving it a weak B- at CinemaScore.

As for “The Snowman,” even the Nordic noir’s director, Tomas Alfredson, badmouthed the movie in the press, complaining that the murder mystery’s plot makes little sense because the rushed production left him unable to shoot as much as 15 percent of the script, so there was a lot missing when it came time to edit the film. Critics took note and gave the film such negative reviews (9 percent fresh at RT) that even Twitter piled on, creating a Twitter moment whose headline read “‘The Snowman’ could be 2017’s worst film.” Audiences agreed, giving the movie a D at CinemaScore, a very low rating given how generous with grades CinemaScore poll respondents usually are.

Sometimes. Since “300” made him a reliable leading man a decade ago, Butler has been hit or miss. “Olympus Has Fallen” did very well; sequel “London Has Fallen” did not. His biggest hits in recent years have been voice performances in the “How to Train Your Dragon” cartoons, which have helped raise his average wide-release opening above $20 million. According to PostTrak, some 24 percent of “Geostorm” viewers bought tickets because of Butler. Even so, that means three-fourths of the audience didn’t care that the rugged Scottish actor was the movie’s hero.

Fassbender is a star — as long as he’s playing Magneto. Outside of the “X-Men” movies, however, he’s not much of a box-office draw, as his dual role in this summer’s “Alien: Covenant” proved. He certainly wasn’t enough to sell viewers on what looked like a been-there-seen-that snowbound serial killer thriller.

4. One Disaster Too Many

The real head-scratcher this weekend will be the failure of “Only the Brave” to break out. Critics loved it (90 percent fresh at RT), and so did moviegoers (A at CinemaScore). Based on a recent true story, it’s an uncynical, unabashed celebration of American heroism, the sort of movie that ought to have done well among middle American audiences. Yet hardly anyone came out to see it; ‘Brave’s dismal per-screen average of $2,332 means that the movie played to largely empty houses.

It’s possible that the movie suffered from disaster fatigue. Not only was the Arizona wildfire drama competing for attention with “Geostorm” (a flashier movie with a lot more action scenes and special-effects spectacle), but with several real-life disasters, including three recent hurricanes and the current California wildfires.

There’s also the fact, ignored by Hollywood, that these real-life disaster movies seldom do as well as expected, as proved by “Deepwater Horizon,” “The Finest Hours,” and “The 33.” Finally, there’s that terrible title, so bland and generic that even moviegoers who knew about the 2013 Yarnell Hill fire didn’t realize that that’s what this movie was about.

And not just because of Halloween. It’s frightening because overall box office remains down. Coming in just under $94 million in total sales, this was the fourth worst weekend of 2017 to date.

But the slump that’s been going on since the middle of summer isn’t the only problem affecting this weekend’s releases. The weekend before Halloween week has become a spooky graveyard for the studios, which have made a practice of quietly dumping many of their weakest prospects there. Last year, it was “Jack Reacher: Never Go Back” and “Keeping Up with the Joneses.” Two years ago, it was “The Last Witch Hunter,” “Paranormal Activity: The Ghost Dimension,” “Rock the Kasbah,” and “Jem and the Holograms” — a slate that gives new meaning to the phrase “disaster movies.”

Why is Hollywood unloading so many of its potential write-offs just before Halloween? The studios may have recognized that this weekend was bound to be a wash, with moviegoers saving their money for next week’s horror reboot “Jigsaw,” not to mention November’s superhero sagas “Thor: Ragnarok” and “Justice League.” Those upcoming films ought to prove that, when Hollywood puts out compelling, crowd-pleasing movies that people want to see, they’ll come back to the theaters in droves, as they have for many of this year’s hits. And when Hollywood fills the multiplex with movies it lacks confidence in and doesn’t know how to sell, you get a weekend like this one.