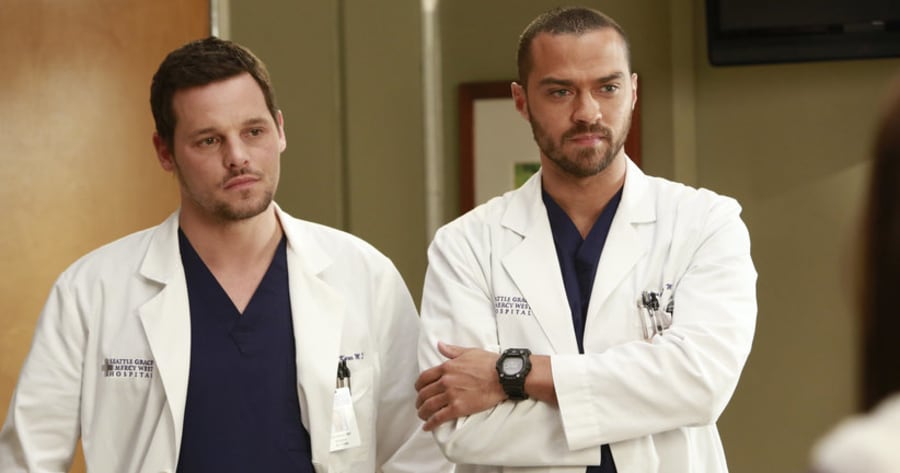 Ahoy, sailors! “Grey’s Anatomy” Season 14 will next get serious for an Iraq flashback episode, then lighten things up for the lads in time for sweeps month.

“Grey’s” has this week off for Halloween specials, then Episode 5, “Danger Zone,” airs Thursday, Oct. 26. After that, Episode 6 will split the ladies and gents into separate groups for “Come on Down to My Boat, Baby,” airing Thursday, Nov. 2.

THE BOYS GO OUT ON A BOAT WHILE THE LADIES HOLD THINGS DOWN AT THE HOSPITAL, ON ABC’S ‘GREY’S ANATOMY’

“Come on Down to My Boat, Baby” – Jackson (Jesse Williams) decides he needs some time off and invites the guys to join him on a day out at sea, while Arizona (Jessica Capshaw), April (Sarah Drew), and Maggie (Kelly McCreary) treat a woman who is hiding a deadly secret.

Guest starring in this episode are Greg Germann as Tom Koracick and Stefania Spampinato as Carina DeLuca.

If Kr. Koracick is still around, that can’t be great for Amelia, right? Unless he’s just there to say goodbye and leave her to heal on her own from here on out?

In terms of the male bonding adventure, that reminds us of Season 3, Episode 7, “Where the Boys Are,” when Derek and Preston went camping and the rest of the boys decided to come along.

Season 14 is meant to have that old school flavor, with Krista Vernoff returning as co-showrunner and the whole season described as lighter and sexier than recent years.

Don’t forget: No new “Grey’s” this week (Oct. 19) but good stuff ahead in the flashback, boat trip, and then special 300th episode.