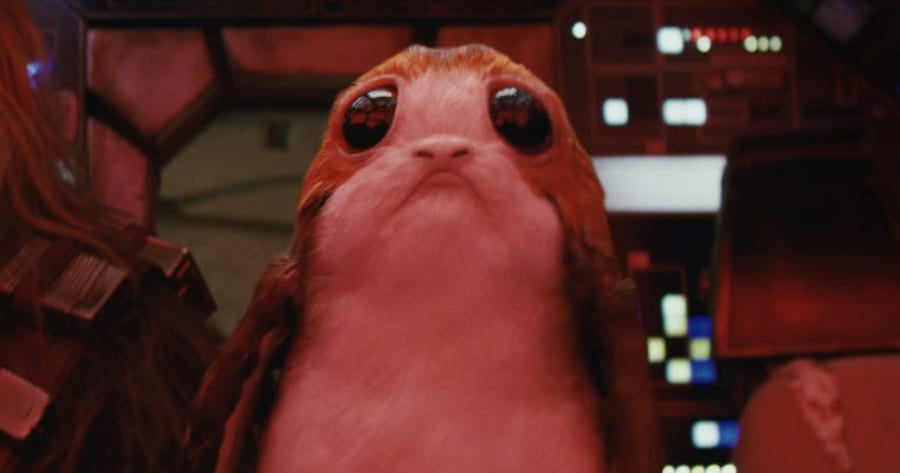 The internet is abuzz about the new full-length “Star Wars: The Last Jedi” trailer. And while there’s chatter about Kylo possibly killing mom Leia and Rey appearing to turn to the Dark Side, what people really can’t stop talking about is the porg.

Porgs are a new creature that will be introduced in “Last Jedi.” As Lucasfilm’s Pablo Hidalog explained, “Porgs are native to Ahch-To, and can be found dwelling along the cliffs of the island where Luke and Rey are. In many ways, they’re the Star Wars version of puffins. They build nests. They can fly. Their babies are called porglets.” (We’re dying.)

Ever since word of the porgs filtered out, fans have been divided. Are they the new Ewoks? Or worse, Jar-Jar Binks? Others are charmed by their adorable appearance. And after the trailer, everyone may just be on #TeamPorg.

The porg is seen with Chewbacca in the Millennium Falcon. After Chewy roars, the porg squawks, too. And Twitter is loving it.

I have watched this little Porg squawk about 70 times now. IT IS HEALING ME. pic.twitter.com/Kl1HF5ykr6

Just go ahead and give me the Chewy and Porg buddy cop film announcement already. #TheLastJedi pic.twitter.com/HbVPZVrLUb

#TheLastJedi trailer literally could have just been the porg and I would have bought tickets pic.twitter.com/9dhL2LLiLa

If even one Porg dies, I will fucking burn the Star Wars franchise to the ground pic.twitter.com/0l7a2BtFsG

This could very well be the meme that ends all memes. #TheLastJedi #porg pic.twitter.com/Mea60NrYCJ