Did Armie Hammer Share a Photo of Erika Jayne on Secret Instagram Page? See the Potential Post as RHOBH Star May Be Living Next Door to Actor 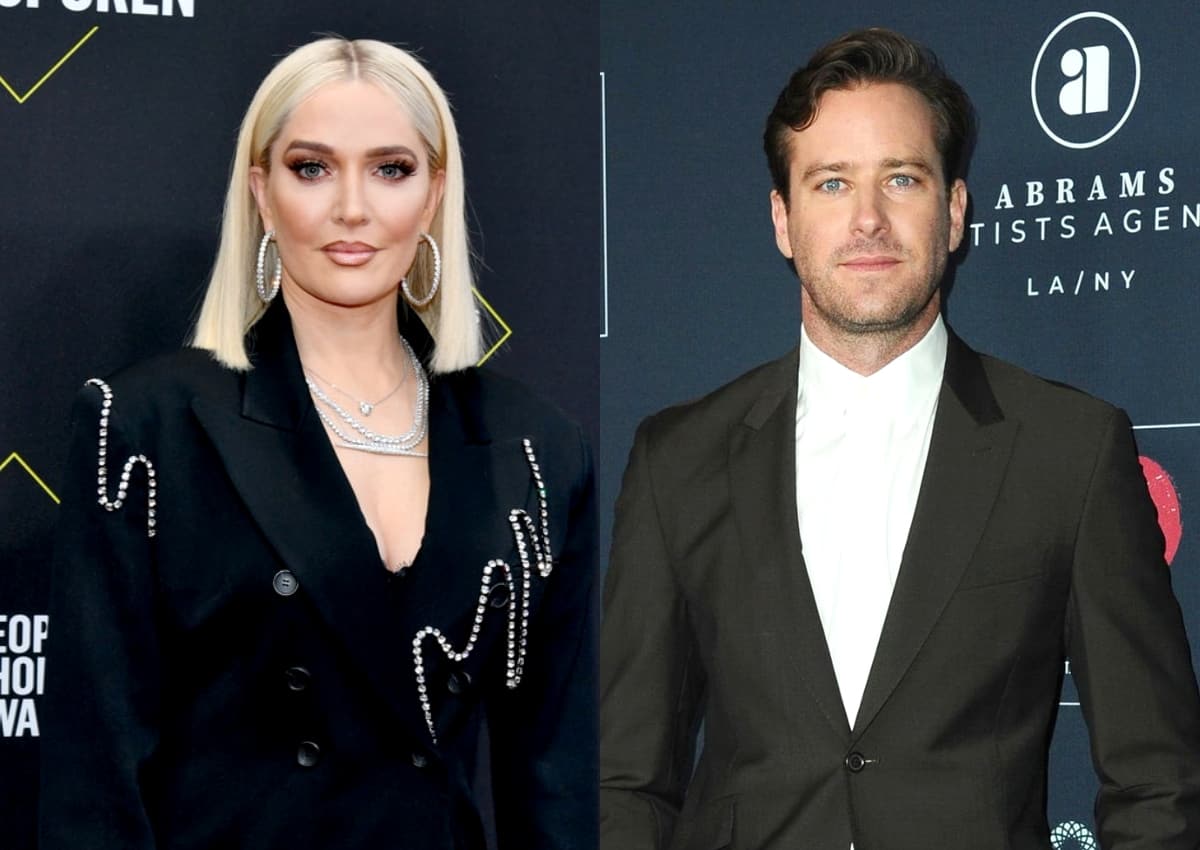 Following the sharing of a couple of screenshots on Instagram, fans of The Real Housewives of Beverly Hills are convinced that Erika is not only living next to the alleged “cannibal,” but she actually attempted to pursue him romantically on social media.

In one screenshot shared by Deux Moi, via Bravo Snarkside, a conversation between the outlet and an insider was featured.

“Erika Jayne has been living [next door] to Armie. Erika Jayne’s rental house is next door to where Armie has been crashing [with] a friend post divorce,” the source alleged. 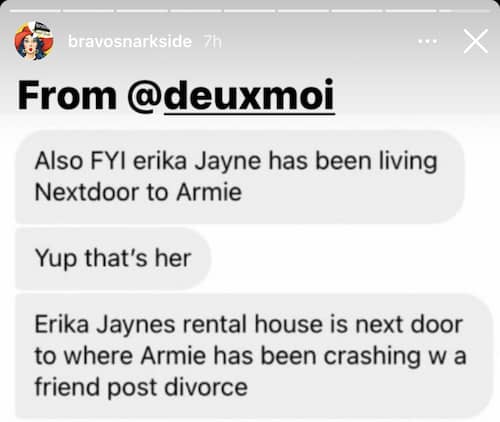 According to the insider, a previous renter said that they would often hear Armie, who was accused of being a “cannibal” following a text message leak earlier this month, having “loud outdoor s*x.”

In another screenshot, a post allegedly made by Armie on his supposedly secret Instagram page was shared.

“My new neighbor just moved in recently and slid in to my DMs. She said she can [hear] what happens over on my side of the fence and she wants in. This is my new neighbor,” Armie allegedly wrote, along with a racy photo of the RHOBH cast member. 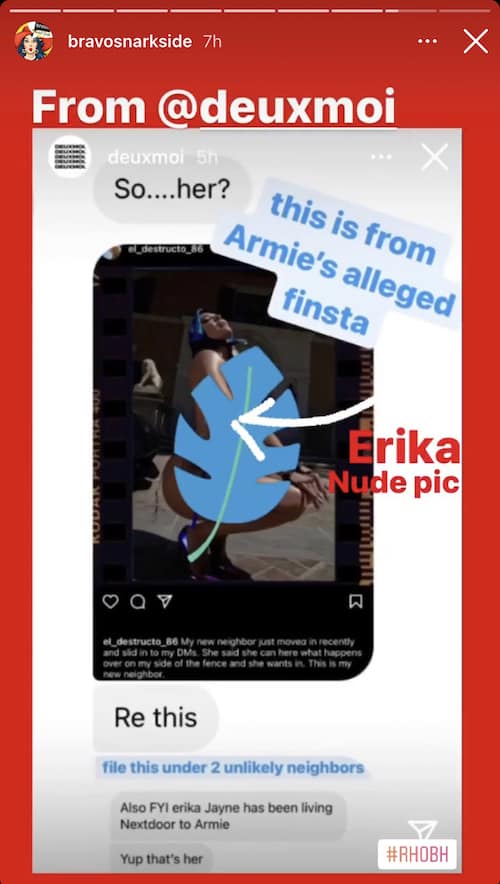 After the screenshots were shared, fans rang out on Twitter with buzz.

“The Erika Jayne and Armie hammer tea can’t be true. Not the call me by your name sequel I was expecting,” one person said, along with a GIF of Erika, who filed for divorce from husband Thomas Girardi last November.

The Erika Jayne and Armie hammer tea can’t be true. Not the call me by your name sequel I was expecting. pic.twitter.com/DiLsIAi05F

“Armie hammer and ERIKA JAYNE are doing the business? am I ever gonna know peace?” another person asked.

armie hammer and ERIKA JAYNE are doing the business? am I ever gonna know peace?

It should be noted that Armie, who is currently embroiled in a ton of controversy after a number of women accused him of sexual abuse, has been known to be colorful with the truth. Just recently, he made a post suggesting he was having a sexual relationship with ‘Miss Cayman’ on this same secret Instagram account mentioned above, and he later had to issue a public retraction after being questioned by the authorities in the Cayman Islands.

As for the ‘cannibal’ allegations against Armie, below are some of the alleged messages he is accused of sending to women on social media. Warning — some of these messages are sexually explicit.

Multiple victims of Armie Hammer came out saying he used his fame to manipulate em to have sex, calling em "kitties" and drink their BLOOD, now WHAT IN HANNIBAL LECTER??? pic.twitter.com/LWxgZdXC4t

The Real Housewives of Beverly Hills season 11 is expected to air on Bravo sometime this spring.