Danica Dow Talks Most and Least Favorite Parts of Filming Vanderpump Rules, and Where She Stands With the Cast, Plus Confirms She Has a New Boyfriend 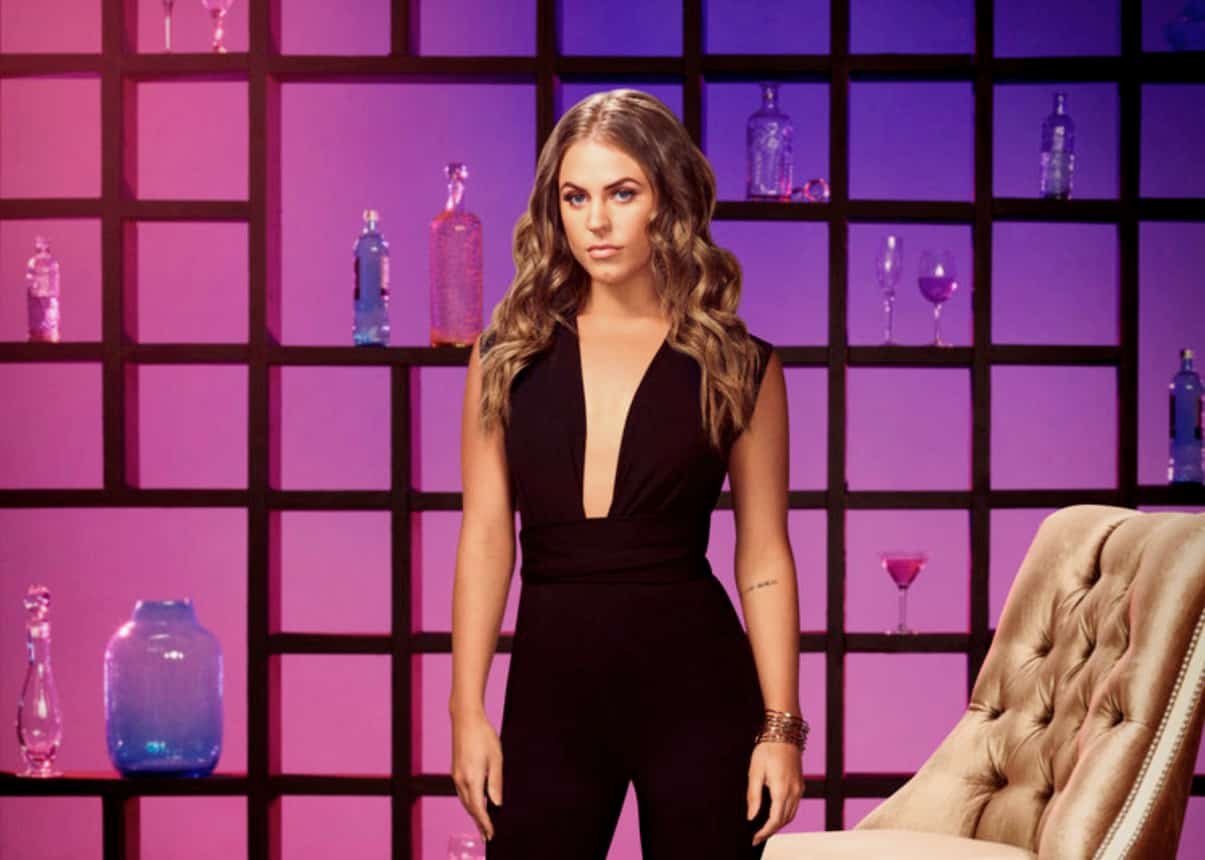 Danica Dow held an “Ask Me Anything” session on her Instagram Stories, and during the Q&A, she spoke about Vanderpump Rules.

Danica reacted to questions about filming and her relationships with her co-stars, including Scheana Shay, Raquel Leviss, Dayna Kathan, and Charli Burnett.

“What was your most/least [favorite things] about filming?” asked a fan.

“Filming is superrr fun! There’s always an event, party, activity going on that they want to film so it keeps everyone busy,” Danica explained of her favorite part of filming Pump Rules.

As for her least favorite part, Danica, who was added to the cast in 2019, said she didn’t like being stuck in Los Angeles during production.

“My least favorite is not being able to go anywhere (weekend getaways/vacation/etc) with people other than the cast for the during of filming,” she shared. 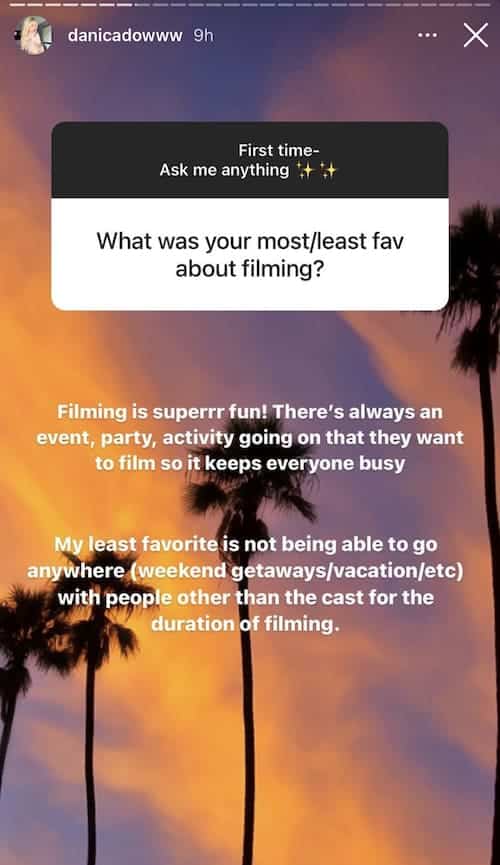 When Danica was then asked if she’s “friends with Scheana,” the SUR employee confirmed she is not and explained that she’s being the bigger person in their relationship by wishing her well.

“We had a minor falling out a while ago over something small that both of us were too prideful to apologize for. Since then she’s believed everything she’s ‘heard’ from sources she barely knows of me allegedly saying things I never said, and then tried to drag me on a podcast. We will never be friends again but I’m happy she’s having a baby and doing whatever she’s doing,” Danica stated. 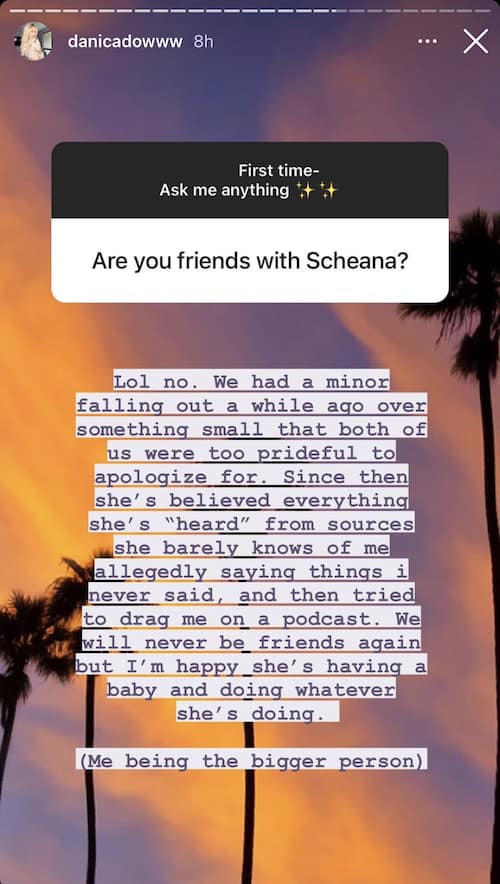 As for her relationships with Charli and Raquel, Danica said that while they are currently on good terms, they haven’t seen one another for some time due to the pandemic.

“Yes just haven’t seen them in a while because of COVID. But hoping we can all get together soon hopefully,” Danica told a fan. 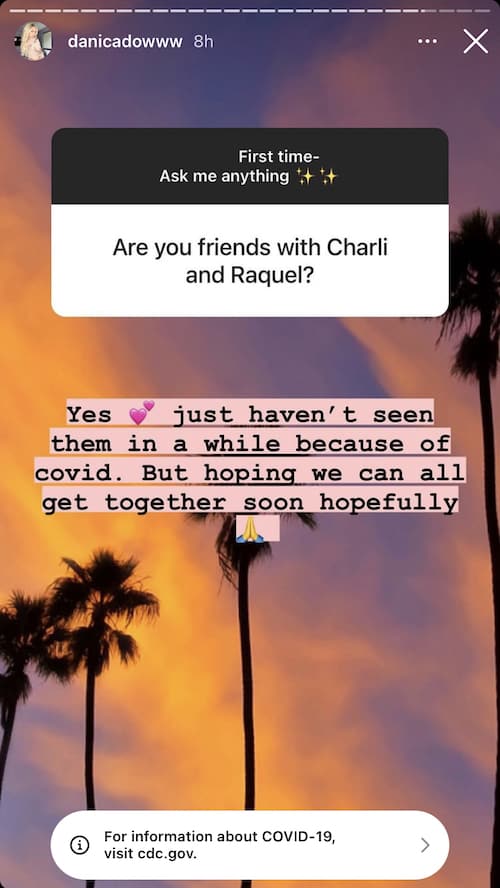 Danica went on to say she is “of course” still friends with Dayna. 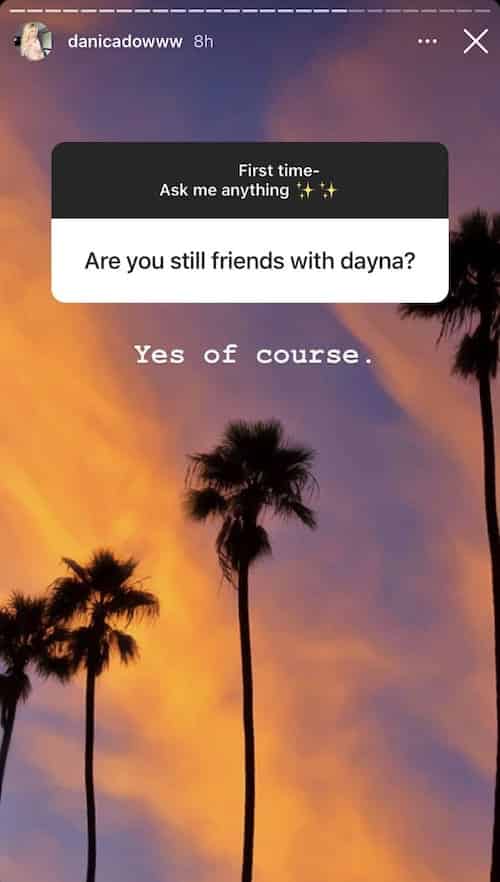 Another person on Instagram asked, “Do you have a boyfriend?”

“Yeeesss,” Danica replied along with a photo of herself and her new boyfriend, who she did not name. 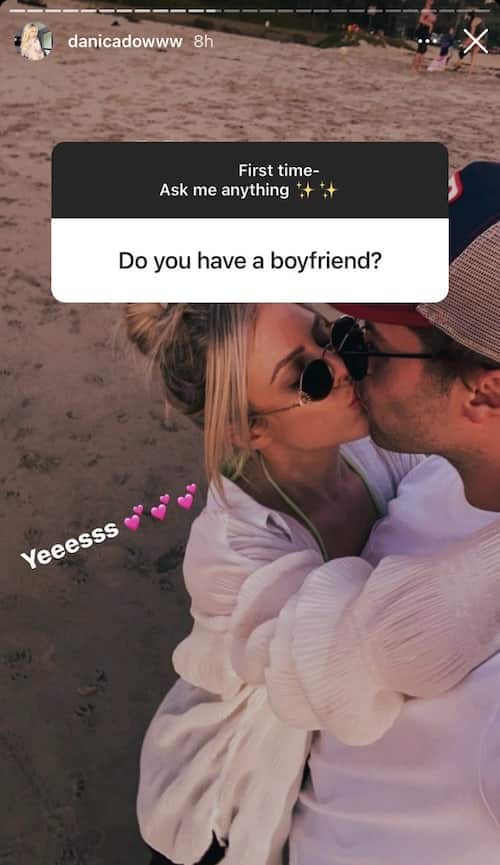 In another Story, Danica revealed she and her boyfriend have been dating for almost six months.

As Pump Rules fans may recall, Danica and her former boyfriend, Brett Willis, went through a messy split last year after he accused her of abuse and she filed for a restraining order against him.

Following the legal drama, an insider told TMZ that a number of cast members from the show were demanding Danica be fired for her violent behavior, claiming she was “dangerous and more trouble than she’s worth.”