After a String of Butt-Kicking Roles, Adrianne Palicki Goes For Laughs In ‘The Orville’ 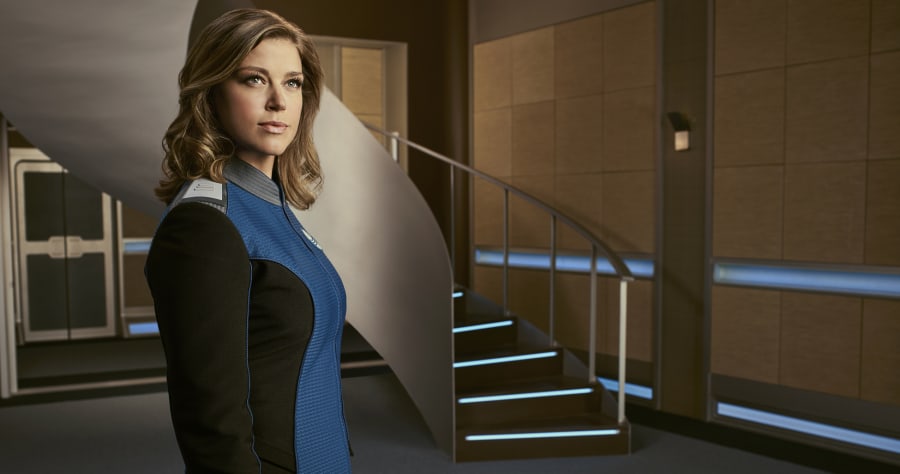 After taking on a series of characters particularly adept at kicking butt, Adrianne Palicki was ready to take on a role that gave her a good laugh – but also kicked butt from time to time.

After making a splash in early roles on “Friday Night Lights” and “Supernatural,” Palicki almost became both a new generation’s “Wonder Woman” and “Lost In Space’s” Judy Robinson but those respective TV pilots weren’t picked up. Instead, she tackled a string of hard-hitting action gigs in films like “Red Dawn,” “G.I. Joe: Retaliation” and “John Wick,” ultimately finding a signature role on the small screen when she appeared as fan favorite Bobbi Morse a.k.a. Mockingbird in two seasons of “Marvel’s Agents of S.H.I.E.L.D.“

The actress has since boarded her latest TV hit, playing “The Orville‘s” first officer Kelly Mercer, who grapples with being made second-in-command to her embittered ex-husband of one year, Captain Ed Mercer (Seth MacFarlane). It’s a part she was happy to take on for her longtime friend MacFarlane, a lifelong “Star Trek” fan who does more than just parody the sci-fi franchise on “The Orville.” And it’s a role that makes the most of many of Palicki’s strong suits, from adventuring on alien words to navigating the awkward but still percolating chemistry between Kelly and Ed.

“There is so much heart and depth to this show,” says Palicki, who joined Moviefone and a small group of journalists to discuss her role. “Not that there’s not comedy as well, but there’s another level to this. And it hasn’t been done, and I’m excited to see how people feel about it because I think it’s very unique and original.”

Working in the genre, and then in this case being able to tweak it, what’s exciting about that for you?

Adrianne Palicki: Here’s the thing — genre is fun because this kind of show, whether it’s set in space or not. The whole through-line and the point of the show is these relationships –- this one being a big part between Kelly and Ed. I think that’s the heart of it. That and having stakes.

So what Seth said from the beginning is, “It doesn’t matter that these are weird, interesting story lines. We have to play it as though this is our truth.” It doesn’t matter if it’s set in space, and I think that’s what gives you that kind of feeling of there are real stakes at hand. We’re not talking about aliens, we’re talking about our friends. It kind of gives an interesting dynamic to the show.

How prepared were you to hit those comedy beats after a long stretch of action and drama in your career?

I’ve done some comedy. You have to be able to do it. She’s a bit of straight man, so the comedy can be out of that. So that’s fun to be a part of. But I’ve known Seth forever and to play around with one of my dearest friends is super cool, and we’ve just become a family. We always say that, but I mean genuinely those are some of my best friends.

How often do you laugh at work?

All the time. Scott [Grimes] is the funniest, but once he starts laughing I can’t stop laughing. It’s like we have to stop for 10 minutes to recoup from that. It’s a whole thing. But it’s hard not to, especially when we’re on the bridge, it’s our family time. It’s like our living room. We all get to be together. They are long days. You get delirious at some point. Somebody laughs, and then just…It’s over. It’s done.

And you’ve had so much action in your career lately. Are you getting enough on this show to satisfy the action junkie in you?

The production design is incredible. Can you talk about walking onto these sets for the first time? What went through your mind?

I was able to walk on throughout the process of the building –- which, by the way, was so minimal if you really think about how epic that set is. They were amazing. They blasted through that and worked their asses off and made some brilliant things.

So to be able to actually see the progression of it, and just how hard everybody is working –- everything is functional! It’s a functional set. We walk around the hallway, and we don’t have to stop and start again. And to be a part of that, I’ve never been a part of something so epic.

What’s been interesting about being around set and seeing the depth of Seth’s sci-fi knowledge? And then there’s also Brannon Braga, who’s run actual “Star Trek” series -– has it been fun being the bystander watching them living out this kind of homage?

It’s just intriguing. Like I said, I’ve known him for almost a decade now. This is the first time we’ve actually worked together, other than on “Family Guy.” To see him work and how particular and specific he is about everything is infectious, but not in a negative way. He’s building a world that is literally the reason he came out to L.A., to do this show. That’s been his dream since childhood, and getting to be a participant in that and helping it evolve is such a luxury.

He’s very, very, very, very particular about everything, and it’s amazing to watch. I’m in awe of him every day, and Brannon as well, and the scientists that they have on set who are like, “What about this planet, and this thing?” I’m like, “I have no idea what the hell they all are talking about, okay?”

When you were on “Agents of S.H.I.E.L.D.,” did you discover how much the fanbase for that show liked the humor that you brought in your scenes with Nick Blood. I feel like that genre fandom loves when you guys on these “serious” shows do something funny.

Absolutely! It’s actually interesting you bring that up, because I think it’s very parallel to these characters, Ed and Kelly. It’s that relationship. They are exes who have this banter back and forth, and it’s fun to watch. Is it sexy? And you still don’t know if they are going to get back together or if they are not going to get back together. There’s a lot of that push and pull and that tug. So, yes, absolutely. I think that fanbase will be very, very similar. Hopefully.

Do you feel there’s an open door for you to make a return appearance on “Agents of S.H.I.E.L.D.?” Maybe one day in one episode, or an arc? Some kind of appearance?

Listen, if they asked me to, and they wanted me to and it worked out with the schedule, I’d absolutely do that. Yeah, I love playing Bobbi. She was so fun. And I loved working with Nick. Everybody on that show. It was awesome.

Like Seth and just about anyone who pursues a career in show business, you were a fan yourself. What’s got you so hooked that it made you want to live out the dream of being an actress?

“The Princess Bride.” I wanted to be Princess Buttercup. Robin Wright changed my life, and I wanted to live in that world. And I also always just wanted to be everything I saw on television. I remember seeing “Apollo 13,” and I was like “Well, I want to be an aerospace engineer.” My mom’s said, “Do you know what that entails?”

Then I saw “Elizabeth,” and I saw Cate Blanchett walk down as the Virgin Queen, and that was the moment I knew I had to be an actress. Because I was like, “I want to make somebody feel the way that she made me feel in that moment.”